Bernard Brogan: A class performer all the way to the last 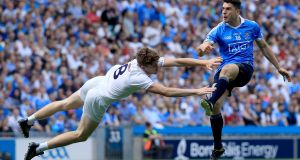 Bernard Brogan: ticked all the boxes as a top class forward during a spectacularly successful career with Dublin. Photograph: Donall Farmer/Inpho

In a funny way, the frustration of his last couple of years on the county panel was just about the only box that Bernard Brogan needed to tick in his extraordinary Dublin career, which he ended on Twitter on Thursday to an avalanche of tributes.

Fast, accurate and lethal in his pomp, which drove his scoring returns to the third-highest in Dublin football history – and unlike those ahead of him, Jimmy Keaveney and Dean Rock he wasn’t always a free taker – he exhibited the single-minded focus of the shooter.

Apparently immune to provocation, he rarely attracted the disapproval of match officials despite being one of the most marked players of his generation.

If there was irony in his hitting the buffers in 2016 when dropped for the All-Ireland replay against Mayo, it was in the high-calibre weaponry he had brought to the previous season, which he ended six points adrift of being top scorer despite having scored just one point of his 6-21 from a free.

More relevantly his contribution in the semi-final replay against Mayo turned the match, his goal and goal assist in the space of 90 seconds as the hour mark ticked into view turned a match that was on course to thwart the start of the five-in-a-row – before we ever got to the conclusion last month.

The goal he scored was an exhibition of the finisher’s art, adjusting his feet at the last minute to get into position to steer home a ball that was arrowing wide from Brian Fenton’s shot.

That was 2015, the year of his last All Star, a Footballer of the Year nomination and captaincy of the Ireland International Rules team.

The following four years were a trial for someone of his status in the game: getting dropped, not getting back, a cruciate injury – the second of his career – just as he felt he might have one last season in him and the pitiless struggle of this year, as he tried everything to get back into match panels, which eventually happened in the All-Ireland replay but without bringing any game time.

At the start of this year’s championship he explained what was continuing to motivate him.

That it didn’t happen was no diminution of his reputation. Team-mate and one of the county’s new generation, Jack McCaffrey, got to speak at Croke Park on Thursday about Brogan’s retirement in the last few minutes before it stopped being hypothetical.

The tribute paid owed more to the stoical endurance of recent years than the stardust of his earlier career.

“I mentioned earlier that there’s a couple of guys I want to meet for a quiet catch up and reminisce and he’s certainly one of those. Bernard is a guy who initially when I was coming into the squad and was 19, I would have thought he’s a very strong character – all the ball has to go through him and that kind of stuff.

“Just to see the kind of team-mate he’s been, the kind of friend he’s been; it’s amazing that he has twins, he’s married, he works in business, he’s at a very different stage in his life than I would be, but the time he takes with everybody, from the youngest member of the panel to the oldest, he’s just a fantastic man.

“That’s probably the most important thing about him. Something I’ve mentioned in interviews before about him is that he really made the transition, in my eyes anyway, from being one of Dublin’s best ever players, an absolute legend, to in the last couple of years when he’s had the cruciate injury and things that at his stage would have stopped a lot of people in their tracks.

“He’s just kept the head down and been completely and utterly selfless and gone about his business. So I certainly wouldn’t be writing any obituaries for Bernard yet. If he wants to go, more power to him. It’s been an absolute pleasure to have soldiered alongside him.”

In a message on the Dublin GAA website, manager Jim Gavin also paid tribute: “The longevity of his inter country career, his collection of medals and awards is a testament to the impact he has on Gaelic games – for that we are truly grateful.”

His long-term comrade, Paul Flynn, now CEO of the GPA, who retired earlier this year tweeted that his former team-mate had been, “A role model that led the way for so many on the pitch and off.”

In 2010, as Footballer of the Year, he was invited to Barack Obama’s White House on St Patrick’s Day along with Tipperary hurling captain, Eoin Kelly.

Now 35, he will settle in to a busy career in the marketing consultancy, Legacy Communications, family life with his wife Keira, to whose support he paid tribute in his retirement Tweet, and twins Donagh and Keaden.

From a high-profile football family – he won the 2011 All-Ireland with brothers Alan, who succeeded him as Footballer of the Year, and Paul and his father Bernard was a mainstay of the 1970s team – he pledged to maintain the lineage.

“I gave my all for the cause right to the end and I am happy now to take my place in the stand, back to where it all began for me as a child, with my own father – cheering on the Dubs. I look forward to these same moments with Donagh and Keadan. Onto the next journey. Up the Dubs.”

Gaël Fickou’s switch to wing a nod to what France expect from Ireland 21:22
Europa League round-up: Celtic let two-goal slip away in France as Lille level up 22:10
Barcelona presidential candidate aiming to bring Pep Guardiola back to Nou Camp 22:05
Connacht’s clash against Benetton postponed after Covid-19 outbreak at Italian club 19:36
Pádraig Harrington hot out of the blocks in Bermuda with opening 67 21:37