Corofin make it seven Galway SFC titles on the bounce 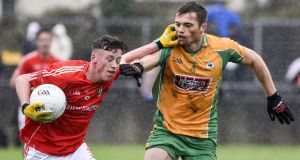 Corofin became the third club to win seven Galway senior football championships in a row as their second-half show of power saw them past Tuam Stars in a replay at Tuam Stadium.

A point down at the break, the back-to-back All-Ireland champions fought back in the final quarter and scored five unanswered points to claim their 21st Galway title.

After the teams finished level in the drawn county final the general assumption was that Tuam Stars’s chance for a first county title since 1994 had disappeared, but their bright start showed they were going to be a match for the champions again.

After winning the toss and playing against the wind Corofin would have been happy to open up a two-point lead when Jason Leonard and Michael Farragher pointed, but Stars soon got the reward their bright start deserved and three points had them in the lead by the 11th minute.

Conditions in Tuam were sodden, but both teams managed well, however Corofin found scoring more difficult and by half-time they had kicked six wides.

Tuam certainly dominated the opening half and by crowding their defending and breaking down each flank with pace they managed to make the most of the space in front of the fit again Kieran Fitzgerald, back into a totally changed fullback line from the drawn match.

With Brian Mannion a handful in the inside line once again, Tuam didn’t kick a wide until the 24th minute, and points from the industrious Daragh O’Rourke and Mannion meant they were good value for their 0-5 to 0-4 half-time advantage.

Five minutes after the restart Jamie Murphy pointed to put Tuam two clear, which looked like a healthy advantage, but Martin Farragher and Leonard didn’t waste any time in drawing Corofin level again.

Ben O’Connell put Tuam ahead following an excellent chip lift in the 41st minute, but it would be their last score until added time, as two Sice frees and a long range Steede effort saw Corofin create history.