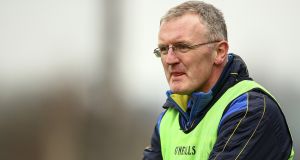 I Brian Lohan: he is Clare’s new hurling manager for a two-year term, with the option of a third. Photograph: Ken Sutton/Inpho

The Clare hurling saga finally concluded on Thursday evening with the ratification of Brian Lohan as the county’s new hurling manager for a two-year term, with the option of a third.

He has named Ken Ralph and James Moran as selectors. Further details of his back-room team will be confirmed in due course.

He becomes the fifth of the 1990s All-Ireland winning teams to take up the challenge. Ralph and Moran were his selectors when he managed UL, winning the Fitzgibbon Cup in 2015 with a number of the current Clare players involved.

Ralph hurled minor for Tipperary but moved to work in Shannon and played with Clarecastle, winning a Munster club title in 1997, and also with the Clare seniors. James Moran is the oldest of the well-known Ahane hurling family and played for Limerick, winning a league medal in 1997.

Lohan was a major presence in Ger Loughnane’s team in the 1990s, and later captained Clare. An All-Ireland winner in 1995 and 1997, he was a four-time All Star at full back ,in which position he was also named in the GAA’s Team of the 1990s. He won the Gaelic Writers Association Hurler of the Year award in 1995.

He will finalise his coaching ticket in the coming weeks, and is expected to sit down with the county executive to lay out his plans as Clare hope to rebound after a disappointing season.

The decision was expected from the moment that Louis Mulqueen withdrew from consideration, but with the county board meeting postponed from Tuesday of this week, some wondered was there a further twist in the quest to finalise a successor to the outgoing management of Gerry O’Connor, who had stepped down, and Donal Moloney.

The latter was interested in continuing, but who walked away in protest and frustration at the delay by the county board in dealing with the matter.

Speaking earlier in the week to Sky Sports about the prospect of Lohan taking over, former Clare All Star Podge Collins was enthusiastic about the potential appointment, recalling how Lohan had coached him at club level.

“He’s been there as a player and a manager. He’s done it with UL. He was in our own club Cratloe and he was very good to have around. Obviously a legend in Clare, and everyone is very familiar with him. It’s hard to find a better man for the job.”