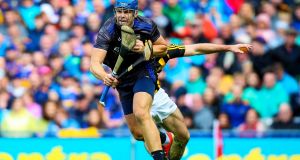 Tipperary goalkeeper Brian Hogan claims his first Hurling All Stars awards and follows in the footsteps of his father, Ken, who won one in 1987. Photograph: Tommy Dickson/Inpho

Though there are occasionally years in which the announcement of the hurling All Star team causes a stir around the place, 2019 is unlikely to be one of them. The head count broadly fits the usual breakdown – seven awards for All-Ireland champions Tipperary, three for runners-up Kilkenny, two each for provincial champions and beaten semi-finalists Wexford and Limerick, plus the annual nod to Patrick Horgan’s genius in a Cork jersey.

At a more granular level, the make-up of the Tipperary contingent is notable in that five of their seven representatives are in defence. With Brian Hogan, Ronan Maher, Cathal Barrett, Brendan Maher and Pádraic Maher all chosen, it’s only the fourth time in the 48-year history of the awards that one county has seen All Stars go to its goalkeeper and four defenders.

Brian Hogan’s selection between the sticks completes the family set – his father Ken was the 1987 All Star goalkeeper. The Hogans are the third father-and-son combination to win hurling All Stars after the Larkins (Fan and Philly) and the Powers (Richie senior and junior) of Kilkenny.

Staying on the family theme, Ronan and Pádraic Maher are chosen on the same All Star team for the second time, having previously made the grade together in 2016. They join Conal and Cormac Bonnar (1989 and ’91), Paul and Eoin Kelly of Tipperary (2002 and ’05) and Billy and Johnny Dooley of Offaly (1994 and ’95) as sets of brothers who’ve twice made it onto an All Star team in the same year.

Pádraic Maher joins fellow Tipperary players Nicky English and Eoin Kelly as well as Limerick’s Joe McKenna as a six-time All Star. Only five players are above him on the all-time list now, all of them from Kilkenny – Henry Shefflin (11), DJ Carey and Tommy Walsh (both nine) and Noel Skehan and JJ Delaney (both seven).

Noel McGrath’s selection at midfield is also worth remarking upon, given that it’s the Tipp playmaker’s first award since 2010. That nine year gap in now the longest any player has ever gone between All Stars, overtaking the record of eight years held jointly by Galway’s John Connolly (1971-79), Limerick’s Eamonn Cregan (1972-80) and the Waterford pair John Galvin (1974-82) and Tony Browne (1998-06).

The two non-Tipperary defenders chosen are Seán Finn of Limerick and Kilkenny’s Pádraig Walsh. Both men will be straightening their ties and walking to the top of the room for the second time on Friday night, with Finn nailing down the number two spot for the second year in a row and Walsh picking up his first gong since 2016. Finn becomes the first Limerick defender to win back-to-back All Stars since Leonard Enright in 1980/81.

In Diarmuid O’Keeffe and Lee Chin, Wexford pick up their first All Stars in 15 years and their first multiple representation on an All Star team since the All-Ireland year of 1996. O’Keeffe is chosen alongside McGrath in midfield in what must surely have been the line on the pitch that detained the judges for the shortest length of time. Chin’s award at right half forward comes at the fourth time of asking, having previously been nominated in 2014, ’16 and ’17.

Of the remaining five spots in the forwards, four were set in stone from a long way out. Since Horgan, TJ Reid and Séamus Callanan make up the shortlist for Hurler of the Year on Friday night, all three were obviously a shoo-in for a place in the team.

Callanan finished the summer as the championship’s leading scorer from play, racking up 8-17 including a goal scored in all eight games. Reid was the highest scorer overall, his 5-83 leaving him 15 points clear of the field. And Horgan had both the highest scoring average at 13.83 points per game across six matches and the highest individual score, with his 3-10 against Kilkenny.

Horgan has now won four of Cork’s nine All Stars this decade. While Callanan is the clear favourite to finally pick up the statue on Friday night, the award wouldn’t be disgraced by going home with any of the three.

The other virtually automatic selection in the forward line is Limerick’s Aaron Gillane, who finished fourth in the scoring charts and who was the one Limerick forward to show the same measure of consistency as in 2018. Gillane is one of four first-time winners this year, along with Hogan, O’Keeffe and Chin. You have to go back to 2008 for the last time there were so few maidens on an All Star team.

The remaining place in the forward line goes to Kilkenny’s Colin Fennelly, which was almost certainly the closest call of the 15. Jason Forde, the Tipperary forward, has to have been in the mix here, while Young Hurler of the Year favourite Adrian Mullen presumably came in for support as well. Forde can possibly count himself the most unlucky but it would have been a tight call. In the end, Fennelly presumably edged it on the strength of his leadership, particularly during his All-Ireland semi-final display against Limerick.

All in all, it’s a team that won’t cause too many rows. Indeed, it’s almost exactly the same selection the Sunday Game panellists went for on the night of the All-Ireland final, with Hogan over Eoin Murphy the only difference.

Hard to argue with that level of consensus.