Defending champions Ballyhale Shamrocks made to work by Clonkill 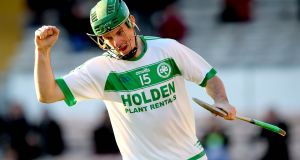 Ballyhale Shamrocks had to work hard to dispose of a gutsy Clonkill side in Mullingar on Sunday afternoon, the reigning All-Ireland champions eventually winning by a nine-point margin.

The Kilkenny champions raced into a 0-3 to 0-0 lead, but a fine goal by Brendan Murtagh levelled the contest in the sixth minute.

Murtagh, a former Leinster player, was untypically wasteful during the following 15 minutes - he shot five wides in total in the first half - while at the other end Eoin Cody was the main scoring threat and his two goals in the 12th and 22nd minutes put Ballyhale in control. TJ Reid also converted three frees and his side led by 2-9 to 1-5 at the interval.

Cody completed his hat-trick within a minute of the resumption of play to end any lingering doubts about the outcome.

However, the Westmeath men battled away manfully with the evergreen Murtagh leading the way and he ended up as the game’s top scorer. He showed great skill to score his second goal in the 46th minute, but a brave Clonkill outfit could never get closer than six points with Reid converting a range of frees for Ballyhale.