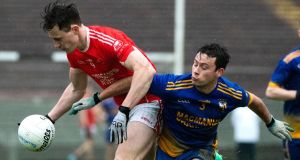 A goal inside a minute of the restart put Mayo champions Ballintubber firmly in control of this Connacht championship quarterfinal tie against Glencar-Manorhamilton at MacHale Park, Castlebar on Sunday.

In very testing conditions scoring was low in the opening half with Ballintubber just in front at the break 0-6 to 0-5, Coran Gavin scoring four of those points for the Mayo champions.

But a cracking goal from Alan Plunkett followed almost immediately by a second yellow card which saw Killian McGriskin sent off, killed off any hope the visitors had of causing an upset.

Ballintubber, who were without the absent Cillian O’Connor, had too much experience, particularly at midfield where Jason Gibbons and Diarmuid O’Connor dominated. But the best player on the pitch was undoubtedly Conor Dolan, who put in stellar performance and kept his side in touch, but, in truth, Ballintubber were never under pressure and eased into a semi-final meeting with Corofin, the team who dashed their hopes of winning their first ever Connacht title last year when they lost to the Galway champions at MacHale Park in the final.

Paul Carey hit 1-6 as Roscommon champions Padraig Pearses advanced to the Connacht semi-finals after a 10 point win over Sligo’s Tourlestrane in Markievicz Park.

A controversial penalty - awarded after an apparent foot-block early in the second and dispatched confidently by Hubert Darcy - proved the game’s turning point. It gave the Roscommon men the breathing space they needed to win despite losing Lorcan Daly to a red card.

Pearses also had Conor Daly black-carded in the opening half, and were fortunate to see James Leonard’s stinging shot on goal smash back off the crossbar after just seven minutes.

Boosted by this let-off, Pearses netted at the other end just two minutes later. Sweeper Niall Carty provided the finish after David Murray’s pass over the top released him into space.

That was Pearses first score of the game, and their first point didn’t arrive until the 17th minute, as Carey claimed the first of his 1-6 tally.

His second pointed free of the day saw his side lead by 1-2 to 0-3 at the break, with Cathal Henry, Adrian McIntyre and Liam Gaughan landing the Sligo champion’s scores.

Tourlestrane felt they should have had a penalty early in the second half when goalkeeper Paul Whelan appeared to take down Gaughan close to goal.

Mayo referee Jerome Henry was unconvinced however, though he awarded a spot-kick at the opposite end minutes later.

The decision left many confused but there was no mistaking the quality of Darcy’s finish, and the full-forward pointed a free soon before Carey turned on the style in the final quarter.

1 Shels chairman Andrew Doyle hits out at ‘appalling’ FAI governance
2 Heroic insanity: When Michael Dunlop raced home in memory of his father
3 Players focus more on life outside game due to lockdown, says GPA
4 Follow the money: How FBI and IRS teamed up on Fifa
5 Rams pip Chiefs in third-highest scoring game in NFL history
Real news has value SUBSCRIBE