Ronan Lynch helps himself to 3-11 haul after move forward 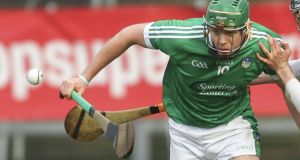 Kerry gave Limerick such a fright in the opening 20 minutes that they suffered a major backlash from then to the end of a disappointing affair at the Gaelic Grounds.

Limerick manager John Kiely moved usual halfback Ronan Lynch to the forward line and he scored 3-11, with two of the goals from 21 yard frees, a point from a penalty, seven points from frees and one from a ‘65’ and two from play.

Pádraig Boyle exposed weaknesses in the Limerick defence as he scored a hat-trick of goals.

Limerick had five points in a row from Tom Morrissey, Seanie Tobin, Ronan Lynch, free, and two more from Morrissey before they were rocked by Kerry’s second goal, again scored by Boyle.

By half-time Limerick led 2-13 to 2-3. Their first goal came from Graeme Mulcahy from a pass from debutant Colin Ryan who had a fine game at halfback.

Kerry did not manage a point from play until the a minute before the break from Jordan Conway but the goals and two points from frees meant that ten points separated them at the break.

The second half was one-sided and Limerick led 4-18 to 2-6 when Kevin O’Brien, with his first touch scored goal number five.

Boyle completed his hat-trick of goals but it was too late to make a difference.

Burnley end win drought to add to Leicester’s woes 16:21
Munster cruise past Ospreys on a dead rubber day at Thomond 15:47
Real Steel sees off stablemate Footpad at Thurles 15:36
14-man Saracens on the brink of last-eight after edging Racing 92 15:50
Class is permanent for Lee Westwood as he claims Abu Dhabi title 13:43
Crossword Get access to over 6,000 interactive crosswords