Laois bounce back as 13-man Offaly continue to struggle 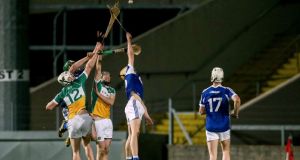 Laois and Offaly players contest for possession during the Allianz Hurling League Division 1B game at O’Moore Park in Portloaise. Photograph: Tommy Dickson/Inpho

Laois bounced back from their opening defeat to Kerry and added to Offaly’s woes at O’Moore Park on Saturday night as they ran out winners by six points in this Division 1B clash.

Offaly went in front 1-2 to no score, with Oisin Kelly grabbing their goal, but eventually Laois settled and hit 1-3 without reply, with Neil Foyle raising a green flag.

Laois then pulled away and their cause was helped when Offaly centre forward Seán Gardiner was sent off a minute before the break when the hosts led 1-12 to 1-8.

Offaly were dealt a second blow when defender Aiden Treacy was issued with a red card for a wild pull across Laois substitute Cian Taylor three minutes into the second half and Laois added points by Ross King, Stephen Maher and Cha Dwyer to lead by eight points entering the final quarter.

Offaly rallied in the closing quarter with Shane Dooley deadly accurate from placed balls but six points was as close as they got as Laois recorded their first league victory in two years.