Mayfield ride to victory on back of Nicky Kelly scoring masterclass

Cork side see off Mooncoin in junior club final thriller 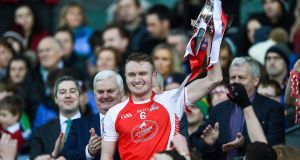 Nicky Kelly saved his finest hour for the biggest stage of all as Mayfield edged out Mooncoin in a thriller to lift the All-Ireland Club JFC title at Croke Park.

Kelly was a class apart as he laid on a scoring masterclass, hitting 11 points, including a glorious stoppage-time winner.

All three goals came in a remarkable four-minute spell early in the second quarter.

Patrick Duggan and David Malone netted for the Cork men, either side of a John Fitzgerald strike, and there was little to separate the sides at that stage.

But Mayfield hit the last five points of the half to lead by 2-9 to 1-6 at the break.

The Leinster men came out for the second period with intent, pulling back points through Kevin Crowley, Ray Wall and Eamonn Hennebry.

Mayfield, with Kelly in electrifying form, kept their noses in front, but their opponents got level twice, through Crowley and substitute Patrick Walsh, who tied it up with two minutes to play.

But Kelly rose to the occasion in magnificent fashion, firing over a brilliant winner deep into stoppage time to seal a first All-Ireland title for his club.