Tipperary see off Waterford on another successful road trip 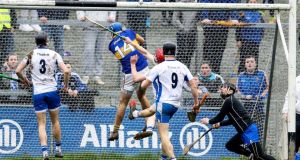 Tipperary came to town as All-Ireland champions and left with their reputation intact, having seen off Waterford in this Allianz Hurling League Division 1A fixture at Walsh Park before 7,344 spectators. As a re-run of last July’s Munster final it wasn’t as emphatic but if the home side acquitted themselves better, they were still second best.

Their cause hadn’t been helped by the late withdrawal of both Jamie Barron and Brick Walsh, the two most significant contributors to the previous week’s successful raid on Nowlan Park.

After a cagey first half when the teams were level 10 times, Tipp pulled away after the break, opening a gap on the scoreboard and effectively made themselves un-catchable with a 58th-minute goal.

It was a slick score, put together as referee Diarmuid Kirwan called advantage and although Ian O’Regan pulled off a terrific save from replacement Noel McGrath, the latter’s brother John was on hand to leap up at the deflection and finish the ball into the net for a six-point lead, 1-16 to 0-13.

Manager Michael Ryan was happy with the outcome that sees his team now clear at the top of the table after two away games but he took issue with the suggestion that the second half had simply been a smooth gear change.

“It certainly wasn’t comfortable. The goal gave us a bit of daylight. A well-worked goal. We thought a point or two either way was how this game might pan out.

“It looked easier by the scoreboard but not for the players out there. It was wave after wave after wave of attack. Our goalie pulled off a great save. These are very small margins. It could have gone any way.”

It was a scrappy, committed match between two teams familiar with each other.

In as much as the pitch resembled a carpet it would have been the once fashionable ‘shag pile’ and its long tendrils kept the ruck quota at a seasonally high mark.

It has been noticeable that Tipperary are carrying themselves with more intent in this year’s league and their appetite for the rucks didn’t lose anything in the comparison with the enthusiastic home side.

Pauric Mahony’s free taking was at its usual high conversion rate and fouls were punished but the visitors were sharper with ball and took their chances more competently, scoring 11 into the wind and adding just two wides.

An absorbing first half progressed with the scoreline running in one-point increments and nine times the teams were level. Tipp scored the opening point of the match through a John McGrath free and closed out the half with a point from Jason Forde and that, in a nutshell, was the substance of the All-Ireland champions’ first-half lead of 0-11 to 0-10.

Hurler of the Year Austin Gleeson started for the first time in this league and was in one of those moods, dedicated to proving himself unafraid to miss. Four wides resulted, as he worked hard to try and get himself into the match. Shane Bennett took on his mantle in the second half and also fired four wide but the team was struggling to keep up at that stage and a certain anxiety became evident throughout the team.

Waterford manager Derek McGrath said that he had been a bit edgy in the first half.

“I thought we were doing well to be only a point down at half-time, if I’m honest. I just thought they were a little bit more clinical and I won’t say a skill deficit, but just very sharp like. I thought Tipp were very impressive now, I can’t be any more honest than that.”

After the break, the winners increased the pressure. John O’Dwyer had come on at the end of the first half for Aidan McCormack, who had discovered that not every week would entail picking off scores against a malfunctioning Dublin.

His manager was sympathetic: “It’s always a risk, coming down to a tight pitch, on one of the top cornerbacks in the game; it was a difficult 25 minutes for him.”

O’Dwyer was a threat from distance, taking over on frees from John McGrath, and might have settled things earlier if he had converted a penalty in the 52nd minute. Steven O’Brien, the former under-21 football star who had an encouraging match complete with two points, had been hauled down by Tadhg de Búrca.

It was typical of De Búrca that he was there to make the intervention because he was ubiquitous in the Waterford defence, anticipating the direction of the ball and clearing accurately or launching relieving runs from the back. Had his team won, the man of the match award should have been his, by acclaim.

But Waterford couldn’t get traction in attack where their half forwards struggled to impact on their opponents – wing backs Séamus Kennedy and captain Pádraic Maher particularly prominent.

Tipperary managed their lead well until a slight sloppiness began to undermine their shooting in the final quarter. None the less they guarded their lead efficiently as the replacements’ bench on both sidelines emptied itself of various familiar faces, such as Séamus Callanan and Maurice Shanahan to name a couple.

Barron is expected to be available for UCC’s Fitzgibbon semi-final next Friday but Colin Dunford, who came on for Waterford, had to go off again having pulled a muscle, which could be bad news for Carlow IT.

It’s been a strong statement to date by Tipperary, who have tended to stall after winning All-Irelands and Waterford won’t be too unhappy after a competitive display.

“I don’t think we’ll be the only team beaten by six points by Tipperary this year,” said McGrath and there wasn’t disagreement.

Johnny Sexton to return to training on Thursday 13:46
Imperious Roger Federer thumps Krajinovic to set up Millman show 13:43
Leona Maguire and Stephanie Meadow embark upon historic 2020 season 11:00
Naomi Osaka and Coco Gauff set up repeat showdown in Melbourne 08:41
Arsenal deny Chelsea at the death; Why there’s more to Saracens than money 07:51
Crossword Get access to over 6,000 interactive crosswords