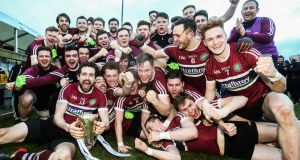 St Mary’s University from Belfast were crowned Sigerson Cup champions for 2017 after pulling off a shock win over holders UCD in a superb final.

And the Belfast side did it the hard way as they recovered from a nightmare start when they conceded two goals in the opening three minutes.

But by half-time they had edged in front by 0-9 to 2-1 and never looked back.

Champions UCD kicked eight wides in the second-half and St Mary’s deservedly held on for a famous win.

St Mary’s recovered from conceding two early goals in their semi-final over UCC and they found themselves facing a similar task in this one.

UCD’s dream start came despite playing against the strong wind, with Dublin footballer Colm Basquel rattling the net on two occasions in the opening three minutes.

Basquel got his first goal after just 52 seconds after he was set up by Jack Barry.

The Belfast university then suffered another big blow when Jack McCaffrey sent Basquel through for his second goal.

St Mary’s responded well to the challenge however, and Oisin O’Neill got them moving after 10 minutes with their first score of the match.

Conall McCann, Conor Meyler and O’Neill again found their range to cut the gap to 2-0 to 0-4 after 13 minutes.

Cathal McShane and McCann then hit the target to tie the match after 20 minutes, before O’Neill edged them in front with a couple of frees, and Ciaran Corrigan pointed to make it 0-9 to 2-0 approaching the interval.

Paul Mannion eventually ended a 26-minute scoreless spell for the champions when he raise a whit flag after a short kickout was intercepted - that left two between the teams at the change-of-ends.

McShane extended the lead after the restart before Barry McGinn and Conor McCarthy responded for the Dublin students.

But the reigning champions couldn’t find an equaliser, as Kieran McKeary added another for St Mary’s.

Meath half forward Eamon Wallace cut the gap, but the Belfast side hit back again through Corey Quinn with the score of the match, to open up a 0-12 to 2-4 lead with 11 minutes left on the clock.

McKeary extended the lead to three with two minutes remaining, and while Basquel and McCarthy cut the gap to the minimum, the holders still couldn’t find find another.

St Mary’s held on for a famous win to bring the trophy back to their college for the first time since 1989.