Kilkenny side take intermediate title with big win over Ahascragh-Fohenagh 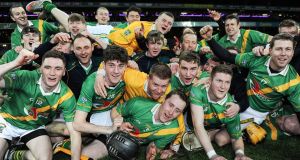 A Carrickshock side fortified by a handful of Kilkenny legends coasted to a convincing victory in the All-Ireland Club IHC final at Croke Park.

Richie Power, Michael Rice, John Tennyson and John Power brought their considerable class and big-game experience to familiar surroundings, and proceeded to turn on the style, just as they have done many times at HQ.

In control from the very start, when Richie Power fired over a couple of points, they played within themselves throughout the opening half, and it was only a penalty, netted by goalkeeper Jamie Power on 23 minutes, that gave them a measure of comfort at the break, by which time they led 1-6 to 0-2.

Cathal Mannion ploughed a lone furrow up front for Ahascragh-Fohenagh, and finished with all but one of their scores.

Damien Walsh rounded goalkeeper Donal Kelly to slide home a second goal soon after the restart, and Richie Power laid on an exhibition of long-range finishing from play as the margin swelled.

It could have been a greater defeat for the Galway men had Kelly not pulled off a superb save from Darragh Brennan.

Donegal facing stern test of their credentials at Croke Park 06:00
Matt Williams: Ireland will need to step up on Wales display to prevail at Twickers 06:00
England v Ireland preview: Ireland’s revival to face its sternest test 06:00
Rare chance for Dublin to shine at Croke Park as they host Wexford 06:00
Sexton unfazed by the prospect of physical showdown at Twickenham 06:00
Crossword Get access to over 6,000 interactive crosswords