Clare race out of the blocks to thrash lacklustre Kilkenny 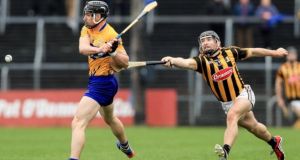 Brian Cody was still debating the linesman after checking on Liam Blanchfield, shaken by a meaty tackle when the Clare attack, in full flight, put the grace note on their day. Substitute Cathal McInerney, exhibiting a high-summer first touch, played an in-field ball to Cathal Malone whose close range transfer to Aaron Shanagher was terrific. In open country and with three terrific points already to his name, the Wolfe Tones man didn’t hesitate. February days can be illusory but in that moment, the All-Ireland day thrill must have seemed very faraway to Kilkenny supporters.

Six minutes earlier, TJ Reid had seen his penalty saved by Donal Touhy; had he landed that, Kilkenny would have been within four. Kilkenny’s brilliantly obdurate streak is alive and well but there was no disguising the gap between the teams on this afternoon.

“We were really up for it and Kilkenny were flat,” summarised Donal Maloney, the Clare joint-manager.

“Their touch was off and they made mistakes and they lost Walter Walsh through injury and probably Richie Hogan and when all those things happen and you are playing away, it can be difficult as we well know.”

Clare started with an enthusiasm that almost looked indecent for this time of year. They had 1-3 on the board before ten minutes had passed, with Kilkenny yet to register a score. Shanagher, in particular, was a handful for both Evan Cody and, in the second half, Shane Prendergast while David Fitzgerald, Brendan Bugler and Jamie Shanahan had an increasing influence on the match from the ferociously contested battle for possession around the Clare half-back line. Kilkenny simply couldn’t get enough possession or space to get motoring. Their full-forward line finished scoreless; their attack landed a single point from play. Walter Walsh had to retire with a hand injury and Richie Hogan was auditioned in centre-field before also coming off.

“We are looking at various options. There is nothing sinister in it,” said Brian Cody of that withdrawal of the Danesfort all-rounder before declaring that his team had been comprehensively had played second fiddle all day.

Stubbornness -and a series of placed ball by strikes by Reid -kept Kilkenny in touch at half time, when they trailed by 1-09 to 0-8. But the anticipated surge never happened. Both defences got on top during a frenetic, untidy ten minutes in the second half. The world has watched Kilkenny exploit those periods of chaos season in and season out but it didn’t happen here. Instead, the Clare forwards began to find chinks of light: McInerney pivoted to strike a gorgeous point on the turn and after Reid’s 65 from the saved penalty, Clare reeled off 1-4.

It was a bright turnaround from their sobering evening against Cork a week ago. Gerry O’Connor acknowledged that Donal Cusack, Kieran Corcoran and Jimmy Browne had spent the week coaching the Clare back line on getting tighter to the players and contesting each ball.

“We put a defensive structure in place to give us that platform to allow us to attack Kilkenny. Some days these come off and some days they don’t. It appears as if there is very little between the teams in that league. Last week the lads went out with a great attitude and it just didn’t happen. We are trying to figure out the solutions in February and March so we can implement them in June.”

The same goes with Kilkenny just now. It will be a long league- for most. As the Clare faithful applauded their players off the field, word went around that Davy Fitz’ and Wexford had beaten Galway above in Salthill. He had Wexford all but promoted after just two games into the league. Even in his absence, he had his county folk talking.