Dublin run out easy winners over Cork despite Crummey dismissal 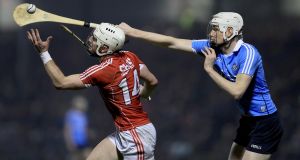 Dublin’s Liam Rushe nips in to claim the sliotar ahead of Cork’s patrick Horgan during the Allianz Hurling League Division 1A match at Páirc Uí Rinn. Photograph: Donall Farmer/Inpho

A fired-up Dublin side survived the dismissal of Chris Crummey after 56 minutes to register a superb win over Cork in Division 1A of the Allianz Hurling League at Páirc Uí Rinn on Saturday night.

Inspired by Eoghan O’Donnell in defence, Dublin’s youngsters showed too much fire and craft for a shell-shocked home side with Donal Burke proving a revelation up front.

After falling behind early on in the first half, Dublin stunned Cork by scoring 1-8 without reply during a devastating 11-minute spell.

They were boosted by a somewhat fortunate Ryan O’Dwyer goal after 16 minutes, when Crummey’s long-range shot deflected off his hand past Anthony Nash.

The goalkeeper redeemed himself by saving Burke’s 25th-minute penalty, though the Dublin attacker converted a resulting 65 for a 1-9 to 0-5 lead.

Dublin claimed the closing point of the half, courtesy of a fine Ryan McBride point, 1-11 to 1-7 at the interval.

On the resumption Dublin pounced for a second goal after 40 minutes, Burke pulling on the ball across the face of the Cork posts for Eoin Conroy to crash home, 2-12 to 1-9.

And while Cork responded with three points of their own, their night was summed up by Horgan missing his fourth close-range free as the Rebels chalked up 14 wides in all.