Tipperary school had lost four finals since 2000, before 19 point win over St Colman’s 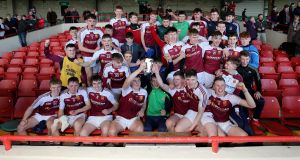 The Templemore team celebrate with the Harty Cup after their win. Photograph: Donall Farmer/Inpho

In their third final appearance in five years, Our Lady’s Secondary School from Templemore finally bridged a 39 years gap by winning the Dr Harty Cup in Limerick on Saturday.

Having lost four finals in the previous 16 years, their were scenes of jubilation as St Colman’s College, Cork were dismissed in a famous 19-point win.

Powered by several members of the All Ireland winning Tipperary minor team the Templemore side led from start to finish in what became a very one-sided affair.

Our Lady’s had five points on the board before Eoin Roche scored the first point for St Colmans - and by halftime they led by 1-12 to 0-4.

Their goal came after 17 minutes when Andrew Ormonde blasted to the net, and only for some great work by St Colman’s goalkeeper Eoin Davis, Ray McCormack would have added another shortly after.

An indication of the dominance of Our Lady’s was that they could afford to hit eight wides in the first half and still lead by eleven points at the break.

Brian McGrath, captain of the Tipperary minors last year, gave a huge performance. He scored 1-7 and played a big part in creating a number of other scores. Jerry Kelly and midfielder Stevie Nolan also shone for the victors.

For the Cork side, making their first final appearance for 14 years, it was a day to forget.