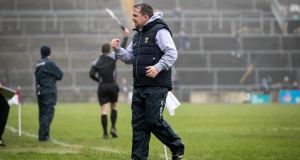 Davy Fitzgerald saw his Wexford side come from behind to beat Galway in Salthill. Photograph: Ryan Byrne/Inpho

Davy Fitzgerald’s Wexford took a major step towards promotion to the top flight after coming from behind in a highly entertaining Division 1B clash at Pearse Stadium.

Both of these promotion hopefuls had won their opening games and when Joe Canning, sprung from the bench for his first action since suffering a serious hamstring injury in the All-Ireland semi-final, blasted home a penalty shortly after coming on, Galway looked set for victory.

But Wexford started chipping away at that six points lead and Galway, despite wind advantage, only managed one more point in the closing quarter as Fitzgerald’s men took over.

And they were not content when they drew level heading into injury-time, showing greater energy than Galway to win frees for Conor McDonald to shoot the points which sealed the win.

It is a huge win for Wexford who looked to be in trouble when they trailed by 2-7 to 0-11 at half-time on a foggy afternoon in Salthill.

There was little between the sides in a game where eleven players were booked - six from Wexford - for most of the opening quarter but Galway pulled away when Joseph Cooney finished an effort from Conor Cooney to the net after 16 minutes.

Conor Cooney also set up the second goal with Johnny Coen finishing neatly to the net as Galway opened up a 2-7 to 0-6 lead five minutes before the break.

But Wexford finished the half strongly with five points in succession to cut the gap to two points at the break.

Galway edged out Wexford by 0-5 to 0-4 in the third quarter before Canning announced his arrival back on the scene by blasting a 52nd penalty to the net after Jason Flynn was fouled.

That made it 3-12 to 0-15 to the Tribesmen but home supporters in the crowd of 7,006 were left bewildered by their collapse after that with a 100 metre free from goalkeeper Colm Callanan their only subsequent score.

The superb Lee Chin was adjudged to have been fouled for the penalty which his goalkeeper Mark Fanning dispatched to the net after 57 minutes which sparked the revival, and once they got momentum there was no stopping the boys of Wexford as Podge Doran pointed and then four frees in succession from Conor McDonald secured a priceless victory.

1 Saracens to accept second 35-point deduction and effective relegation
2 How do Klopp’s Liverpool measure up against greats of past?
3 James Lowe relishing the work, rest and play of his Irish rugby adventure
4 Welcome to Iten in Kenya – home of champions and cheats
5 Father of All Blacks’ Barrett clan has plenty to smile about
Real news has value SUBSCRIBE