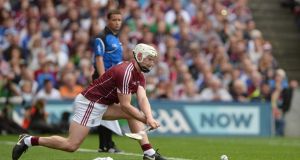 Despite Galway playing all of the hurling, Waterford’s second goal levelled matters 0-10 to 2-4. Galway’s next score however was the perfect response. Joe Canning had already popped over two beauties from play, and added to that with a terrific sideline cut to restore his team’s lead. He finished up with 0-9.

Michael Donoghue’s call to start Johnny Glynn was a gamble - and when he left the field as the only starting Galway player from midfield up not to have scored - it appeared a costly one. At the time Galway trailed by a point. Niall Burke came on and made a massive impact, scored 0-2, and won some crucial frees. Jason Flynn was another to bag 0-2 off the bench.

With 30 minutes remaining in the game last year’s Hurler of the Year Austin Gleeson had yet to score or have any major influence on proceedings. He collected a ball on the D and looked to point over his shoulder, only to be blocked brilliantly by Gearóid McInerney and then hounded by the Galway centre back on the pickup. It summed up Gleeson’s day and as the match wore on he began forcing things and made some silly decisions.

On 48 minutes Kevin Moran was found by Pauric Mahony in acres of space on the left wing, he had time to settle himself and put his team two points up, but his shot drifted wide. From the restart Galway worked it to Niall Burke and he levelled matters. He quickly added another and within three minutes Galway were three points up. A five point turnaround.

With 10 minutes left a key call went against Shane Fives and Waterford to allow Joe Canning to double Galway’s lead, instead of presenting Waterford with the chance to draw level. Fives was coming out of his defence and looked to be getting fouled, but the referee was happy with the tackling and pulled him for overcarrying. The Waterford line was furious, everything seemed to be swinging in Galway’s favour at a key stage.