Tony Keady – ‘The bigger the occasion, the better he was’ 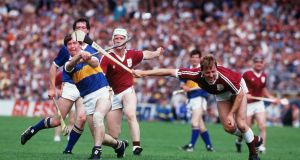 The news about Tony Keady being taken suddenly and seriously unwell on Tuesday hit like a thunderbolt and his passing two days later at the age of 53 has left both Galway and the global GAA community in a state of stunned sadness.

His status in his home county as a member of the last Galway team to win the All-Ireland is immense. Centre back on the team, which recorded back-to-back titles in 1987-88 and twice an All Star, he was also named Hurler of the Year in 1988, recognition of his outstanding performances.

If his career was both short – he played his last intercounty match before he was 30 – and splashed with a singular controversy, neither feature has done anything even to asterisk the immensely high regard in which he is held in the hurling community as one of the great players.

He always resented greatly the suspension imposed on him for playing without authorisation in the United States, arguing that he had been misled by assurances from the Laois club in New York that he was eligible to play. The suspension ruled him out of Galway’s All-Ireland 1989 semi-final against Tipperary, the third time the counties had met in successive championships.

With his team going for three-in-a-row, Tony Keady would miss the biggest match of the season.

In what is now a haunting line from the Laochra Gael programme dedicated to him, he answered the question as to what he felt should be his epitaph by saying, “They should have let me play in ’89!”

A commanding figure at the heart of arguably the most famous half-back line in hurling flanked by Peter Finnerty and Gerry McInerney, he was also a terrific striker of the ball. With his white helmet and elemental displays in the biggest matches he was one of the great figures of a team whose legend burned brightly, as Galway struggled to recapture the Liam MacCarthy in the decades that followed.

Conor Hayes captained the back-to-back teams and remembers the man who hurled in front of him in the spine of the defence.

“He was one of our best players. When he turned it on, there was nothing to touch him,” said Hayes. “He could be ordinary enough in league games but the bigger the occasion, the better he was. His best performances came on the big days in Croke Park. He seemed to be nerveless going out onto the pitch. If you look at the old footage you’d see the likes of me nudging him and poking him with the hurl to get him going but he never needed it.

“There were a lot of oul’ myths about him – that he drank a lot and was a renegade – but it was rubbish. If anything, he was particularly aware of the importance of minding yourself and I remember him giving out about other fellas smoking.

“He always looked after himself and up until the end he had maintained his fighting weight and was very fit looking. As a hurler he was as good a centre back as I’ve ever seen and when you needed him on the big day he was outstanding.”

The Irish Times hurling analyst Nicky English captained Tipperary in the 1988 All-Ireland final and was centrally involved in the big matches of that era.

“It was a great rivalry and then in 1989 when he was suspended – something that for the Tipperary players was going on in the background – we missed him and he was a huge loss to them, no question about it.

“My heart goes out to his family and Galway hurling. He was such a strong and able boy is the way I’d put it – that it’s hard to believe he’s gone so early. He was a powerful figure on that team. Not the biggest but he was unbelievably strong and at a time when strength was sometimes used just to overwhelm opponents he was a brilliant hurler as well.

“With that strength to get under the dropping ball at centre back he was able to win possession and strike superbly. Sixty-fives or 70s as they were back then weren’t a given at that time and forward free takers would not go out that far because they didn’t have that range. He was the best of that era at hitting them, and farther out.

“I think everyone’s been struck by the timing of it as well. This is as good a chance as Galway have had since 1988 to win the All-Ireland. It’s hard to believe that he could have been at the semi-final enjoying that thriller on Sunday and watching Galway come out the right side but that he won’t be around for the final.”

Hayes believes that he would have been an adornment to hurling in whatever era he played.

“People ask me how he’d do in the modern game and I laugh at them. Could you imagine Keady as a sweeper? He’s absolutely mop up in that kind of a scenario. He’d read the game well and he could drive the ball a distance and with accuracy. He was excellent at catching – he had all the skills.

“I called out to see him last year and his children are enthusiastic about the game. He had this mini-pitch out the back with goalposts and nets down the back. He still had that love for the sport and was a great family man, which is the saddest thing about it.

“Even to say that he’s dead is still utterly beyond belief. Even yesterday I was still hoping that we’d get news that he’d pulled out of it and was improving and that something would happen and he’d be okay again.

“You always felt that he’d make it because he’d always rise to the occasion and produce a performance when it was needed but this time the odds were stacked too heavily against him.”