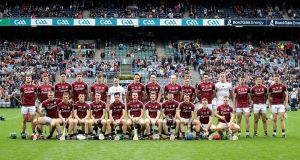 1 Colm Callanan (Kinvara) Twitter: @ColmCal1
Age: 34 Height: 5’ 11” Weight: 12st 8lbs
Tidy, efficient goalkeeper. Ticks all boxes really and gives confidence to the players in front of him. Experienced with a low error count. Smart and hits accurate puck-outs while his shot-stopping is also an asset.

3 Daithí Burke (Turloughmore) @Daithiburke68
Age: 24 Height: 6’ Weight: 14st 2lbs
Unusual anxiety and a couple of slips against Tipp rattled Galway. Powerful and good in the air, he’s a superb defender who has steadied the defence by moving to full back – like JJ Delaney, a comparison which isn’t outlandish.

4 John Hanbury (Rahoon Newcastle) @johnhanbury4
Age: 24 Height: 6’ 1” Weight: 13st 12lbs
For someone who could be error prone, he’s been a revelation this year stepping up when inspiration has been needed. Chance came because of Paul Killeen’s injury but he has taken it, playing his part in a very solid full-back line.

5 Pádraic Mannion (Ahascragh-Fohenagh)
Age: 24 Height: 6’ 1” Weight: 13st 1lbs
A serious hurler who has developed physically and part of a great line that ultimately saw off Tipperary down the stretch with their power and strength. Good hands and can score if given the chance as well.

6 Gearóid McInerney (Oranmore Maree)
Age: 26 Height: 6’ 3” Weight: 15st 13lbs
The switch to centre back has transformed his game and Galway’s. The display at the end of the semi-final reminded me of his father. There’s not many hurlers that can send Pádraic Maher backwards. Aerial power and much-improved distribution.

7 Aidan Harte (Gort) @AidanHarteGort
Age: 28 Height: 6’ 1” Weight: 13st 8lbs
Very important as an experienced leadership figure and invariably the free man when they come up against sweeper defences, as they most likely will this weekend. This suits him because he’s versatile and reads the game and distributes well.

8 Johnny Coen (Loughrea)
Age: 26 Height: 6’ Weight: 12st 13lbs
An ideal midfielder in the modern game. Very athletic and as a former corner back, good in tight exchanges. Rucks and a crowded middle third suits him down to the ground. Likely contest with Barron will be a key match-up.

9 David Burke (St Thomas’s, capt) @davidburke90
Age: 27 Height: 5’ 11” Weight: 12st 11lbs
At his best, one of the best midfielders around in recent years. Highly skilful, prolific scorer, uses and carries the ball well. Coasted through Leinster but surprisingly anxious against Tipperary and needs to put that behind him.

10 Joseph Cooney (Sarsfields) @joseph_cooney
Age: 26 Height: 6’ 4” Weight: 15st 4lbs
Hands on his hips, he can look like a bigger version of his Dad. Increasing importance visible in quantity and quality of scores like the point against Wexford hit from the 20-metre line into the Davin end. A handful for anyone.

11 Joe Canning (Portumna) @JoeyCan88
Age: 28 Height: 6’ 2” Weight: 14st 11lbs
Super player now in a better team but undermined by an injury picked up before the Leinster final. Initially looked very restricted against Tipp but without ‘The Joe Show’ in the final 20 minutes, there would have been no show.

12 Jonathan Glynn @johnnio13
Age: 24 Height: 6’ 4” Weight: 15st 1lbs
Had a monstrous impact in 2015. A late return to the fold after being away in the US since then. Looked more up to speed as a sub in the semi-final and if fit will justify selection. Immense aerial ability.

13 Conor Whelan (Kinvara) @conorwhelan10
Age: 20 Height: 6’ Weight: 13st 8lbs
Having a brilliant year. His physical development has left him well able to stand his ground for a young player. Touch, awareness and bravery – he has it all. Dexterity shown in one of his points against Tipp was exceptional.

14 Conor Cooney (St Thomas’s)
Age: 24 Height: 6’ 2” Weight: 15st 2lbs
Up until his semi-final fade he was having a great year. Brilliant in the Leinster final, when he gets on ball he can strike 50 metres accurately with virtually no pull-back. At his best he’s a serious weapon.

15 Cathal Mannion (Ahascragh-Fehonagh) @MannionCathal
Age: 22 Height: 6’ 2” Weight: 13st 8lbs
Ankle injury has disrupted his championship after a great league final. Versatile attacker and most likely to play corner forward, he has the class and potential to make a big impact if he has regained full fitness.