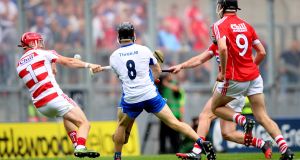 Cork were edging towards an All-Ireland final up until the moment Austin Gleeson robbed Christopher Joyce out by the Cusack-Hill 16 corner and speared a Beckham cross to Barron. Left-hand catch, short-grip finish.

The pass to Noel McGrath caused the Tipp maestro to adjust his stride and pull on the fly. It wasn’t the truest ball ever struck but Callanan still got down well to turn it around the post and preserve Galway’s lead at a vital stage.

Lee Chin was immense all through and he capped a huge display by climbing into the clouds for a soaring catch late on and feed Jack Guiney. Guiney’s pass found Matthew O’Hanlon galloping through and Wexford were out the gap.

Cahalane picked up possession on his own small square and set off on a solo run, the crowd’s roar growing as he went. He laid off to Luke O’Farrell on the Clare 45 before Patrick Horgan iced the sealing point.

The first save, a reflex deflection of an angled Patrick Horgan shot, was terrific by itself. But the follow-up less than a minute later, diving to his right after Seamus Harnedy had time to pick his spot, was other-worldly.

Cork had been the better side but Tipp had snuck ahead through Brendan Maher with five minutes to go. Lehane caught the puck-out over Ronan Maher and skidded off to the sideline from where he nailed a score of pure not-today defiance.

This is why he’s the reigning Hurler of the Year. Sliding on a loose ball in the Cork D, he hit down on the sliotar to bounce it up into his hand, turning as he got to his feet, swatting a point as he stood up. Outrageous score.

The goal that kicked down the door. With Waterford a point up in extra-time, Barron collected 60 metres out, jinked past Cillian Buckley, used Maurice Shanahan as a decoy with a dummy handpass, bang. Game over.

Now obviously, he should have passed to Brick Walsh. But Aussie gonna Aussie. Collected on the 45, sprinted in on goal, threw a dummy handpass to discombobulate Mark Coleman, no pass to Brick, a feather light finish. Ridiculous.

That’s how you win a game. Backed up Johnny Coen after his long-range free dropped short, got in position on the Cusack sideline. Tipp pressure meant he had time only to catch and strike. It was time enough.