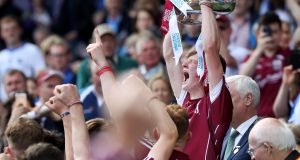 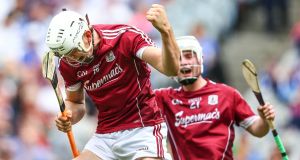 Jack Canning celebrates at the end of the game. Photo: Cathal Noonan/Inpho 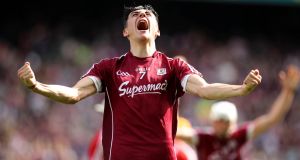 Galway captured their 11th All-Ireland minor hurling title with a superb second-half display in what turned out to be an historic day for the Tribesmen.

The county have never before won the senior and minor titles in the same year and a momentous day for the Canning family from Portumna began with Jack Canning – Joe’s nephew – firing home two goals in a man-of-the-match display.

Cork, pre-match favourites, lived up to that billing in the opening half and looked to be sailing to victory when they led by 2-3 to 0-3 after just 15 minutes.

Brian Turnbull scored what is probably the quickest goal ever in an All-Ireland final when he finished to the net after just eight seconds.

But Galway, looking for their second crown in three seasons, did not panic and early points from Donal Mannion and Conor Molloy helped settle them.

However, just when Ben Moran cut the gap to three points, the Rebels found the back of the net again when Evan Sheehan’s shot hit the target.

Galway hit back with points from Daniel Loftus and Molloy before Daire Connery and Turnbull responded for Cork.

The sides continued to exchange points but Galway finished the half strongly with the superb Seán Bleahane, who finished with 0-5 from play, and Molloy cutting the gap to 2-7 to 0-10 at the break.

Canning struck two minutes after the restart for his first goal, with Sheehan and Turnbull pointing for Cork and those scores being cancelled at the other end by Molloy and Bleahane.

But Galway never looked back when Canning blasted to the net for his second goal after 39 minutes to push them into the lead for the first time.

Liam O’Shea gave Cork hope with a point but Galway pulled away, with Molloy, Bleahane and Canning shooting excellent points to lead by 2-16 to 2-11.

By then the huge Galway crowd got behind the Tribesmen as they pushed for home but Barry Murphy responded with a point for Cork with 10 minutes remaining.

Molloy cancelled that with a free at the other end but that was to be Galway’s final score of the match.

They were forced to endure a nervous finish as Cork came with a late rally.

Turnbull pointed and Robert Downey also found the range to leave four between them with five minutes left on the clock.

A late rescue job seemed to be on the cards when Turnbull took his tally to 1-7 with a point four minutes from the end of regular time.

But they couldn’t close the gap from there and the goal they needed to snatch victory in the end never looked like materialising, and the greatest day in Galway’s hurling history was off to a flying start with the first part of an unprecedented double.

1 My favourite sporting moment: Roscommon minors restore pride to a county
2 Premier League players launch charitable fund to help NHS
3 New head of UK Athletics plans to hand over Farah-Salazar report
4 Women’s sport gets the conversation started on pelvic health
5 Pro14 nations could miss out on €15m in TV revenue if league is not completed
Real news has value SUBSCRIBE