Galway have lots of room for improvement – David Burke 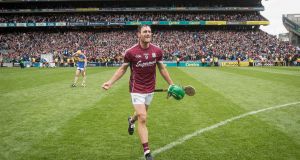 David Burke celebrates the semi-final win over Tipperary. “Nobody can complain that Waterford and Galway weren’t the best teams in the championship this year.” Photograph: Ryan Byrne/Inpho

This may be a novel All-Ireland hurling final for the country but for most of the Galway players, the All-Ireland final is no novelty.

Runners-up in 2015, Galway had to watch last year as Tipperary, who had edged them by a point in the semi-final, went on to claim the grand prize. For David Burke, the lesson simply reinforced something he always believed: it comes down to the little things.

“In games like that where they are so tight it can go either way,” Burke says, reliving the mad closing passages of their latest scrape against Tipp which hinged on Joe Canning’s spellbinding winner.

“If Daithí [Burke] hadn’t caught that last ball and Pádraig Mannion hadn’t intercepted the pass, there were scores there. It comes down to small little things like that. And lucky enough in the last play we managed to work the score. That was the most pleasing thing.

“It wasn’t pretty hurling but we managed to get over the line. It mightn’t have been the classic it was last year. It was a real battle all over the field. Every line and every area, it was hard marking and hard graft to get possession and it was everything you’d want in a tight hurling game. Hard to get scores as well. So we are delighted to come through that game.”

Burke is 27 now and a veteran of seven seasons. Sunday’s All-Ireland final will be his 40th championship appearance and he will captain the team. As he wryly notes, the country in general will buy into a final that guarantees a new winner.

“I think everyone in the country will want both teams to kind of win so it will be interesting to see who other counties will be supporting.”

But he feels the perception that the absence of either Tipp or Kilkenny from this final will make it an easier proposition for both teams is overstated.

“I suppose Tipp and Kilkenny not being there is probably a bit strange for people looking on. But I think nobody can complain that Waterford and Galway weren’t the best teams in the championship this year.”

If Waterford’s rejuvenation has come on the back of their rigorously-worked sweeper system, there is a real sense of purpose and control about Galway’s pattern of play this summer as well. Burke believes that Sunday could begin as a “bit of a chess match” as both teams figure each other out.

“Suppose there is game plans within the game plans,” he says. “But there have been tactics – Cyril Farrell has come out there talking about tactics in the 1980s in finals. They have been changed and improved upon in recent times. But going back then there was talk of third midfielders and this crack. It has changed and will change again in five years’ time. For us, whatever we have been working on all year we have to try and develop.

“There were aspects of our performance against Tipp we weren’t happy about. There is massive scope for improvement for me personally in the game. We might have lost the midfield battle and still got over the line. If we don’t win the midfield battle the next day will we still win the game? Myself and Johnny will be thinking about that.”

As Burke points out, Galway have employed the sweeper system when it suits them and have faced it against teams besides Waterford, referencing the 2015 season when he noticed Richie Hogan drop from midfield into the traditional centre-half position while their number six went deeper again.

“And I was thinking that everyone says they don’t have tactics when they do, like. He was playing practically as a centre back with their centre back playing deep. That was them closing out a tight game.”

In retrospect, he feels Galway were a bit exposed going into the 2015 final, on a high after coming out the right side of another one-point Tipp semi-final classic and not quite ready for the mettle which Kilkenny employed when it mattered.

“Any memories of that final, we were there or thereabouts and managed to fall away when Kilkenny upped the intensity. I think it will be very similar the next day. Both teams will try whatever agendas they want to set out and you just have to match that intensity early on. They will know what we are trying to do as the 70 minutes go on and hopefully that will be enough to get us over the line.”

Burke’s partnership with Johnny Coen at midfield has worked for Galway all summer. Their duel against Kevin Moran and Jamie Barron, whom Burke describes as “massive all year” will have a critical bearing on the day. Moran has been a heavyweight performer for Waterford while Barron is in the form of his life.

“They have been the engine room for them all year. Myself and Johnny have been chatting since the game and looking to see how we can nullify their threat. They will be doing the same. That battle is key and I think whoever wins it will probably win the game.

“They will have to match that performance of the last day – they got was it 2-4 from the middle of the field. Brick Walsh is having a massive year too and Austin [Gleeson]. But we are playing well too so it might start out as a bit of a chess game. But after that it might open up to be a thriller.”