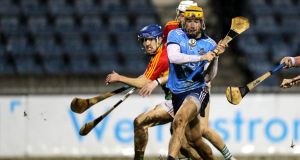 Dublin began their Allianz National Hurling League Division 1B campaign on a positive note when accounting for Carlow by six points at a rain-sodden Parnell Park on Saturday evening.

Mattie Kenny’s struggled for fluency in the opening half but managed to assume control after the break with substitute Donal Burke delivering an eye-catching display that swung the contest in his team’s favour.

The hosts started impressively thanks to early points from Fergal Whitely and Fiontán McGibb and they pushed four points clear by the fourth minute as Darragh O’Connell timed his run to perfection before blasting home past Brian Tracey from 12 yards.

However, their ill-discipline in the tackle allowed the visitors to settle through the impeccable free-taking of Martin Kavanagh, with his five points and a Ted Joyce score restoring parity for Carlow by the 17th minute.

Carlow’s momentum was maintained through successive scores by Joyce and Séamus Murphy as a struggling home outfit stayed in touch through a brace of John Hetherton frees.

However, Kavanagh’s superb second point from play in injury time ensured a deserved 0-11 to 1-6 interval lead for the visitors.

McGibb’s deflected goal attempt within 30 seconds of the restart halved Dublin’s deficit and after substitute Burke had levelled matters soon after, Eamonn Dillon’s scruffy finish at the second attempt in the 40th minute enhanced the Dubs’ position.

A sumptuous Dillon point reflected Dublin’s growing confidence as they stretched their advantage to five points by the end of the third quarter following points from Tomás Connolly and Paddy Smyth.

Burke was hugely influential as the contest evolved, thriving at corner forward, and his three further points allowed the hosts to remain relatively comfortable despite spurning a number of presentable goal chances.

Kavanagh’s precision at the opposite end of the filed ensured that the visitors availed of Dublin’s profligacy but the contest was effectively settled in the 64th minute as Dillon fed Burke for a smart finish across the helpless Tracey.