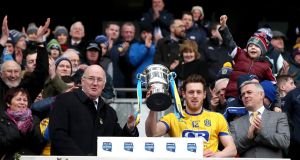 Manager: Kieran McGeeney (5th season)
Selectors: Jim McCorry, Paddy McKeever, Denis Hollywood
Last good league: Division Three champions 2018
With Jamie Clarke, James Morgan and Stefan Campbell back on board, Armagh look to be starting to get their legs under them. That said, McGeeney’s panel is still pretty young on the whole and lacking in experience. Rian O’Neill, Jemar Hall and Jason Duffy lead the fresher faces and McGeeney will look to bring them on apace.

Manager: Colm Collins (6th season)
Selectors: Enda Coughlan, Evan Shanahan, Declan Downes, Brian Carson
Last good league: 3rd Division Two 2018
The most encouraging aspect of their recent McGrath Cup triumph was the amount of fresh faces they used to win it. Of the 15 who started their most recent championship game, only six started again Cork a fortnight ago. Will still be driven by the old guard of David Tubridy, Gary Brennan and Keelan Sexton but Dermot Coughlan and Gavin Cooney look to be decent additions.

Manager: Ronan McCarthy (2nd season)
Selectors: Seán Hayes, Eddie Kirwan, Jason Ryan
Last good league: Runners-up 2015
Well at least they have a five-year plan. The worth or otherwise of it won’t be judged during this campaign but a start is never bad. Colm O’Neill and Donncha O’Connor have retired and Aidan Walsh has gone to the hurlers so McCarthy’s panel is young and getting younger. Probably a bit early yet for the promising Blake Murphy but Nathan Walsh and Damien Gore are likely to be given their head.

Manager: Declan Bonner (3rd season)
Selectors: Stephen Rochford, Karl Lacey, Gary Boyle
Last good league: 3rd in 2017
Won’t be in Division Two for long if the mood takes them, although getting by without the Gaoth Dobhair contingent – not to mention Michael Murphy – for the first month at least could put them under a bit of strain. Michael Langan has been taking the eye at full-forward and could give them a different dimension.

Manager: Rory Gallagher (2nd season)
Selectors: Ryan McMenamin, Shane McCabe
Last good league: Runners-up Division Three 2018
Plenty of comings and goings for Gallagher to contend with. Ryan McCluskey, Eamon Maguire and Pat Cadden all called time over the winter, Séamus Quigley has moved on as well, and Tomás Corrigan will be travelling for the early part of the league. Of the newer names to play in pre-season, Ultan Kelm and Johnny Cassidy did most to catch the eye.

Manager: Cian O’Neill (4th season)
Selectors: Karl O’Dwyer, Tom Cribbin, Alan Flynn
Last good league: Division Two runners-up 2017
Eamonn Callaghan has retired, Niall Kelly, Johnny Byrne, Mick O’Grady and, most eye-catching of all, Daniel Flynn are all unavailable for now. So O’Neill has more refreshing and rebuilding to do in this campaign than he’d have liked. Jimmy Hyland and Aaron Masterson are the obvious candidates to step up and Eoghan O’Flaherty is back in the mix after a couple of years away.

Manager: Andy McEntee (3rd season)
Selectors: Finian Murtagh, Donal Curtis, Gerry Cooney
Páraic Harnan and Mickey Newman are back in harness after a year away from McEntee’s squad, while the re-imagining of Summerhill forward Barry Dardis as a goalkeeper is an experiment worth noting. Joey and Eamonn Wallace are long-term absentees with injury. Meath have been in Division Two for seven leagues in a row – hard to see them being good enough or bad enough to change that in 2019.

Manager: Liam Kearns (4th season)
Selectors: Shane Stapleton, Paul Fitzgerald, Paudie Kissane
Last good league: 4th Division Two 2018
Tipp’s only loss over the winter was the retirement of stalwart midfielder George Hannigan so they’re in decent enough shape. Kearns has repatriated Paudie Feehan and Paul Maher from the hurlers into the bargain and is working off a 40-strong panel with a host of last year’s under-20 squad involved.