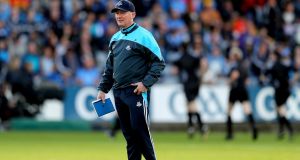 It wouldn’t take all that much effort for Jim Gavin’s vital personal organiser to be “mislaid”. Photograph: James Crombie/Inpho

1 Take the Dubs out of Croke Park and replace them with Garth Brooks. Forever. Not only that, but keep it vague as to where they will be playing. For instance, Dublin play Monaghan on Sunday. They need only consult today’s edition of The Irish Times to discover that they are to be in Clones at the appointed hour of 2pm. This is virtually handing it to them on a plate. They should have to find out precisely where in Monaghan – Mullahinsa, Drummeril, Black Shanco – the game might be played of their own volition. They have all the resources. If they don’t turn up on time; their tough.

2 Real Dubliners go six/seven generations back. The rest are blow-ins. These arrivistes should be horsed back to their counties of origin. So far, Declan D’Arcy is the only man to have made a decent stab at repatriation. If Dublin was left to real Dubs, it would reduce the overall population of the Fair City to 36,000 approx (depending on where U2 are domiciled during the head count) – a solution that would ease the housing crisis and finally shut everyone up when their football team completes the seven-in-a-row.

3 Everyone has seen Jim Gavin carrying a slender folder at matches and presume it to contain the blueprint for those fiendishly brilliant game plans. In fact, the man is notoriously forgetful. We’ve lost count of the number of television interviews where he laughingly acknowledges: “I’ve a head like a sieve.” So he carries a heap of post-it notes containing essential reminders such as “Ring Dermo” and “Pick up almond milk on way home from Croker”. It wouldn’t take all that much effort for this vital personal organiser to be “mislaid” – thrown behind the cistern in Clones or fired into that airing cupboard in Fitzgerald Stadium where they keep the five-in-row kit that never was worn. The man would quickly become a shambles without it – and Dublin’s season with it.

4 Jack McCaffrey has phenomenal speed. Several independent, scientific studies have proven that this unreasonable turn of pace is attributable to Dublin’s population advantage. In his collegiate days, young McCaffrey was fond of a lie-on and would leave it until the last possible second before out-sprinting thousands of other commuters to catch his bus to lectures or training, a habit that gave him an unfair advantage over his rivals from down the country who would mosey up to training in a sponsored SUV. Congress should pass a motion stipulating that McCaffrey be required to run to away venues in places like Tyrone or Mayo, rather than travel on the team bus, thereby reducing his match speed to the point where he is merely insanely fast.

5 If this doesn’t work, a special congress should be called to pass a motion where by McCaffrey is shackled, á la the three-legged-race of primary school fame, to some other notorious Dub speed merchant such as Eoin Murchan. That would surely soften all of their coughs.

6 Don’t sit back and invite them on to you. Mind you, don’t push up too far either.

7 Dublin chairman John Costello confirmed in his 2017 annual report that an in-house examination led them to “discover that Paul Mannion and Jack McCaffrey do have a sixth gear”.”Unfair! Charge the Dubs hefty emissions fees for this. In fact, make them pay Ireland’s entire greenhouse emissions bill for all the hot air talked about them on the Sunday Game.

8 In the same report, John Costello noted that 11,500 fixtures were scheduled for players in Dublin between the ages of eight and eleven. It is well known that every juvenile Dublin footballer has at least two and sometimes three full-time personal GAA coaches at their beck and call in order to further their development. This needs to be reduced to one coach per Dub child.

9 On the subject of Costellos: don’t forget to stick to Cormac like glue when he comes on or he will score 0-3 in seven minutes and the final will be over before you know what’s going on.

10 Centerparc: It’s true that despite having a population of 1.3 million, the Dubs can only play 15 men on the field. So to make things fairer still, why not allow other Leinster teams to play everyone they got? Longford, for an instance, has a population of 40,873. If every one of those Longfordians was allowed play against the Dubs – the prohibitive cost of kitting out the team notwithstanding- then there’s no way Brian Fenton would have “the freedom of the park”. It would make a game of it.

11 Park the Bus. The Sunday Game has treated us to umpteen scathing analyses of the doomed attempts of opposition teams to metaphorically “park the bus” against Dublin’s ace attacking machine. However, it would be fun to see how the well-tailored pundits would respond if a Kildare or a Donegal were to literally park a 48 seater air-conditioned Volvo directly across their goal-line. There’s nothing in the rule book to prevent it.

12 THE CCCC should stipulate that All-Ireland winning captains must tell yarns and include an auld bar or two of a song in their podium speech or face being stripped of the title. Stephen Cluxton would retire instantly rather than suffer that indignity.

14 Force Dublin to field the fuller full-forward. All true Dublin teams have contained number fourteens with a somewhat curvaceous silhouette and the sublime feet of Gene Kelly – Jimmy Keaveney, Joe McNally and Vinnie Murphy being prime examples. But in recent years; Dublin have played gym-toned athletes/catalogue models up front. For all of their brilliance, it has never looked right. Whoever plays 14 for the Dubs this year should be required, by motion passed at Congress, to “adapt”, like Christian Bale’s Dick Cheney, until they resemble the cuddly, ingenious proto-type city sharpshooter that we all love and miss.