Keith Duggan: Kilkenny and the case for the defence

Will Cody release Pádraig Walsh and hold fresh auditions for pivotal No 3 jersey? 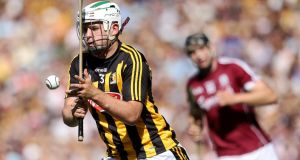 Pádraig Walsh: some in Kilkenny believe the versatile defender would be better suited to a half-back role. Photograph: Tommy Dickson/Inpho

Last summer’s Leinster championship launch unexpectedly delivered what was the first great moment of a hurling summer that would be crowded with glitter and brilliance. Kilkenny manager Brian Cody was present. His young, untested team had just won a league which nobody had predicted.

Now, the Kilkenny manager was being quizzed on the upcoming championship by Colm Parkinson in what turned out to be a highly entertaining conversation. Parkinson came armed with what may well be Cody’s least favourite subject on earth: other people’s opinions on Kilkenny hurling.

“I ignore it completely,” Cody assured his interviewer of his reaction to what was being said about his team. “Because the lads who say it can change their minds the next day.”

Pressed on the view that Kilkenny had tweaked their tactics – a view posited not just by Davy Fitzgerald but JJ Delaney and Eddie Brennan – Cody replied. “JJ has to say something. He has to say something. The lads are now pundits – or even geniuses, maybe, now they are as well. So they have to speak on it.”

If Delaney and Brennan heard that line, then they would have recognised the sound; a door closing on the outside world.

Ignoring the noise has been Kilkenny’s way since Cody took charge 20 years ago. One of the ongoing opinions bouncing around in the league last year was that Kilkenny had to solve issues at full back and centre back, a point that Cody was quick to clarify that afternoon.

“I can never recall myself stating that we had a problem at [numbers] three and six . So I am being asked to state what other people thought. And other people think what they think. I am certainly not on record anywhere as having a worry about number three or number six. I think we have two excellent players there – and we also have, we also have other players who can play in those positions as well.”

Kilkenny’s refusal to do what everyone expected – nothing – in last year’s league silenced that conversation as Pádraig Walsh’s versatility was again put to use at full back.

In the championship, Kilkenny doubled down on their league success, starting with a memorably late win which floored Pat Gilroy’s Dublin team and ending with a gripping 0-27 to 1-22 defeat to Limerick in the All-Ireland hurling quarter final.

It was, remarkably, Limerick’s first championship win at senior level over Kilkenny since 1973. And it was a huge psychological leap for the Treaty men. But on the hour mark in that match, hurling had its van Hesling moment with Kilkenny. Cody introduced John Donnelly in the 62nd minute.

His first contribution was to score – an excellent, vital act. His next was to sweep up a loose ball, carry it towards the Limerick goal and deliver a pass to Richie Hogan, who scored his tenth championship goal.

For those few seconds, it appeared as if no Cody team could actually be stopped; here they were, league champions and ready to storm into All-Ireland semi-final.

Decades of form and tradition were washed away in the next five minutes as Limerick, ravenous in their defensive cover, replied with three points in a row before edging clear in injury time.

Afterwards, Kilkenny were praised to the hilt while it was noted that Limerick could have had four goals rather than one but for several brilliant stops by goalkeeper Eoin Murphy.

Flash forward to this week and the debate about who should man full back for Kilkenny this year is ongoing. JJ Delaney, in a generally positive appraisal, reiterated his belief that Kilkenny ought to release Pádraig Walsh to his natural half-back habitat and identify a new full back for the championship.

For most of s Cody’s decades in charge, Kilkenny’s backroom team didn’t have to think very hard about the full-back position. Noel Hickey made 47 championship appearances and finished with nine All-Ireland medals. Delaney was switched to full back from wing back in the latter years of his career and retired in 2014, regarded as the best all-round defender to have played the game.

Similarly, Kilkenny enjoyed long-term residencies at number six in the years when Kilkenny were operating on a different realm. Peter Barry was routinely selected there until his retirement in 2006 and then Brian Hogan made the position his own for a further seven seasons.

Following Delaney’s retirement, Joey Holden moved into full back and normal service continued in 2015. Kilkenny successfully defended their All-Ireland title, winning their 36th and most recent senior championship. But the following September, a rampant Tipp full-forward line contributed 2-15 of the winning score line of 2-29. Séamus Callanan scored 0-13, including nine from play.

In the days afterwards, Kilkenny’s former forward Charlie Carter reckoned that Holden had been “hung out to dry” by the lack of support from his half-back line. Keeping a tight line between the full and half-back lines had become a Kilkenny trademark, but in the second half, Tipp’s attackers enjoyed more daylight than they had ever experienced before against black and amber defenders.

Last season was an assurance that all the vital characteristics of Cody’s Kilkenny teams – the honesty and refusal to quit and determination – are to the good.

Huw Lawlor played full back when Kilkenny faced Galway in the November exhibition in Sydney and is being touted, along with Conor Delaney, as a possible candidate for the number three shirt this season.

Restoring Kilkenny’s reputation for scrupulous meanness in defence will be high on the agenda this spring.