Fault lines appear for Kerry in a kingdom under pressure 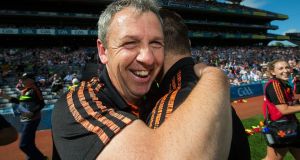 Peter Keane takes over as Kerry manager hoping to restore that winning feeling to the county. Photograph: Tommy Dickson/Inpho

It’s different for Kerry. The county moves further past the Ó Sé era of its history with a kaleidoscope of questions filling the sky. But in Kerry, all football questions boil down to one question: Can they win it this year?

The answer below in Kingdom country, thought if not voiced, is: we must.

Last September, in the days after Dublin sauntered through the closing minutes of their fourth successive All-Ireland win, Tomás Ó Sé put his thoughts together for his weekly column in the Irish Independent. His reflections were a de facto acknowledgement that the world in which he had grown up had vanished. Dublin had fallen into a 0-5 to 0-1 hole against Tyrone in that final. But in the end they had swatted the Ulster men away. Their wins over Mayo had been narrow, enthralling, incident laden. Here was proof of the new dispensation.

“I’d never go so far as to predict, six, seven, or eight All-Ireland finals in a row,” Ó Sé wrote – a line that contained the inference that such a prospect is unthinkable rather than impossible – “but the fear is now, for anyone outside the capital at least, that there isn’t a team emerging that can consistently beat them. They simply look unstoppable.”

Few players-turned-analysts have been as consistently admiring of Dublin as Ó Sé: he likes how they play and how they keep their mouths shut. Under-statement is Ó Sé’s calling card. If he wouldn’t “predict” that Dublin can go eight years unbeaten, it doesn’t mean he doesn’t privately fear it. What if he nailed a truth that day? What if Dublin are simply unstoppable?

Dublin’s transformation from 1970s nostalgia act to unprecedented juggernaut has forced Kerry football people – all Kerry people, in other words – to think differently about themselves. The old certainties have been stripped away with bewildering haste.

Go back to that gripping day up in Clones last year if you want to feel, again, the moment when those mental barricades were stormed. Monaghan were hosting Kerry and loving every minute of it; champagne football, confidence to burn and a home crowd who had been waiting their entire lives for that hour. That Kerry salvaged a draw had as much to do with Monaghan blinking at the critical second.

It proved to be Kieran Donaghy’s last hour in a Kerry dressingroom. And it would mark the end of Eamonn Fitzmaurice’s term in charge of Kerry football. After he stepped down, it became obvious that during last season, Fitzmaurice realised that he simply wouldn’t be given sufficient time and breathing space to construct a team capable of matching Dublin.

If 2014’s All-Ireland victory was one of the great Kerry guerrilla raids – it’s very rare that you see a championship winning side materialising in such a short space of time – then the subsequent years were defined by the public anxiety over what Kerry could and should do about Dublin. Last summer, that nervousness was acute.

In Kerry, the pressure on managers to win has always been relentless and, at times, merciless. But not since the Mick O’Dwyer era has any Kerry manager been confronted with such an onslaught of excellence from Dublin. For three decades, the general rule was that if Kerry didn’t win it, then some other county would. The joy was diffuse and, therefore, disappointment in Kerry was more palatable.

In the past four years, that has changed. Dublin aren’t just building something in their dominance: they are also knocking down truths that were self-evident. Kerry’s near-miss with the mythical five-in-a-row, denied by Séamus Darby’s late All-Ireland final goal for Offaly in 1982, has always been a tolerable and even romantic failure because, until this year, only Kerry could come that close.

They were denied by what has become the most famous football goal of them all, along with a dash of hubris and interference from the gods. All of those comforts will be washed away if Dublin sweeps the board this year.

“For me, the only team with the potential to beat Dublin is Kerry,” Ó Sé said in that same column. “The question is: will the Kerry team be ready next year? And are they going to get their houses in order and build a defensive unit that makes it hard to score?”

There, in a nutshell, was the prospect facing whoever the next Kerry manager would be. Peter Keane wasn’t officially appointed until early October. His guidance of three Kerry minor teams to the All-Irelands titles of 2016, ’17 and ’18 completed a stunning five-in-a-row for Kerry at that grade. Now, his task is to somehow cobble together a team capable of preventing Dublin of doing just that at senior grade.

Tyrone, the All-Ireland finalists and recent McKenna Cup winners, visit Killarney on Sunday. You can bet they will be in a mood to test the credentials of the new Kerry set-up. David Clifford, the one dazzling light for Kerry last year, heads a substantial injury list and won’t be seen until halfway through the league. David Moran, the senior partner on Kerry’s unsettled midfield board, is away on honeymoon. Kieran Donaghy is playing basketball for good now. The Dr Crokes contingent are still in club competition.

At best, Keane will be fielding a deeply inexperienced senior side to face Tyrone. They meet Dublin in Tralee as soon as February 9th for what will be a hotly anticipated Saturday night match. Even then, they will be looking for a sign that Kerry will be up to the task in summer.

But in Kerry, it is always different. In a terrific interview with Radio Kerry before Christmas, the three-time All-Ireland winner Dara Ó Cinnéide identified the fine line between merely winning and retaining values.

“First and foremost, the game is more important than the players; the game is more important than the infrastructure around it. It is not attractive to people of an older generation specifically. It is not as attractive to me. I still love to watch the game. In Kerry we are playing some very nice football. Maybe not successful . . . I see Eamonn Fitzmaurice recently was asked to give advice to Peter Keane. His own word of advice was – ‘win’.”

That’s the dilemma facing Kerry as the new season begins. They are second favourites for the All-Ireland, even if it is a distant second right now. They feel morally obliged to uphold the tradition of expansive, kick-passing, attacking football. But the need to win – the need to beat Dublin in a championship match –has become paramount. The five-in-a-row song is coming back to haunt them. Again.

Either way, 2019 will be a fault line year for Kerry football.

1 Cheltenham faces criticism after racegoers suffer Covid-19 symptoms
2 Pelé’s personal keepsakes to go under the hammer
3 Ian O’Riordan: Learning to run for the first time all over again
4 Golfer below par after licking ball
Real news has value SUBSCRIBE