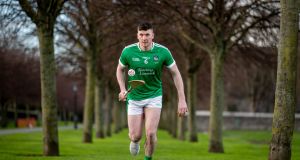 Limerick’s Declan Hannon. “Time has flown really. 2018 was great and all, but it’s well and truly over at this stage.” Photograph: Bryan Keane/Inpho

Whatever else Declan Hannon sounds certain about it’s that 2018 is now put to bed. Tucked in, cuddled up, lights out.

Not all Limerick hurling supporters, or indeed their rivals, might agree. As defending All-Ireland champions there will be a constant reawakening of the year gone by, beginning with Sunday’s Allianz Hurling League opener against Wexford. Nothing would kick-start their season better than a win over the champions.

For the supporters too there’s still some living in the dream which came with Limerick’s first All-Ireland in 45 years, delivered after a positively classic summer of Sundays: they’ll come to Innovate Wexford Park expecting more of the same.

Hannon doesn’t deny that 2018 changed everything. In his ninth season with Limerick, his only previous honour being the 2013 Munster title, playing at full forward, he ended up captaining the team from centre back, also winning an All Star in that position for perfect measure. The immediate challenge is to repeat last year while not being held up by it.

“Time has flown really. 2018 was great and all, but it’s well and truly over at this stage,” says Hannon, just two weeks back from a team holiday in LA and Cancun, and possibly a bit behind the pace already.

“Clare have already won the Munster League, a trophy for 2019, and I suppose we have a bit of a target on our back. But like last year we’ll just focus on ourselves, our own performance, to get the best out of ourselves in every training session and every game.

“Going to Wexford Park will be a spicy enough affair, but looking forward to it. Even before Christmas, playing Tipp and Kerry in the Munster League, we did a good bit of training. Lads were eager to get back the match-day feel. That’s where lads are more comfortable. The touring around Limerick, bringing the cup to schools and clubs and everything, was fantastic, great for the county, but there comes a time you have to park that as well.”

Now 26, Hannon made his senior debt in 2010 while still a minor. For others 2018 was their debut season. Fresh arrivals like defender Sean Finn, centre forward Kyle Hayes, and corner forward Seamus Flanagan knowing little else but All-Ireland success. For Hannon that’s only a positive.

“Some of us who’ve been there eight or nine years have seen plenty of bad days for Limerick hurling. We’ve been through them all, and that probably made 2018 so much sweeter. But I wouldn’t mind being in the boys shoes either, so successful all the way, minor, under-21 and senior. I played five years under-21 for Limerick and won two matches, which is horrendous. Whereas the boys have won two All-Irelands.

“So I suppose it’s up to older lads to guide them. If they do lose you have to get up and go again. But they’re very grounded, and have a massive desire to win, whether it’s challenge or championship. So they’ll be fine. I don’t think there is anything to worry about with those guys.”

One of the first things manager John Kiely told his team in the aftermath of their All-Ireland success over Galway last August was that victory should not change any one of them as people. Even after lifting the Liam MacCarthy, Hannon insists he is no different.

“Look, it was a dream come true, but I’m aware that 2019 is here, the standards we have to hit again. I don’t want it to be a case that Limerick have to wait another 45 years before they get in another All-Ireland final, or win another win, and we’re very conscious of that, trying to represent the county the best we can. We don’t want 2018 to be the talk for 2019.

“Trying to do back-to-back has

proven quite tough in the hurling side of things anyway. The Dublin footballers seem to have it down to a tee, but it’s all new for all of us. We’re All-Ireland champions at the minute, but there’s only one team can win 2019, and we’ll have to up our performances another five or 10 per cent to emulate last year.”

Getting that extra five, 10 per cent is where Kiely comes in: Hannon credits his manager for raising everyone’s game in 2018, and expects he can do likewise this year.

“He’s tough but fair. We played a lot of in-house games last year, and if you played well in them you got onto the team or onto the panel. So there was massive competition, and I think that was a massive difference in Limerick.”

Even without the threat of relegation, being back in Division 1A for the first time in Hannon’s career with Limerick adds extra incentive.

“People have talked about it in terms of last year. Ourselves and Galway were both in 1B, and both of us got to the All-Ireland final. But as players you want to be in the top tier of these competitions, and be as competitive as we can. I’d say we’ll probably know in the first couple of weeks where we’re at. There’s only so much the management can do. It has to be led by the players. They have to drive it on. They have the push the standards more than we did last year to be competitive again.”