Mayo dial up some early drama in the MacHale gale 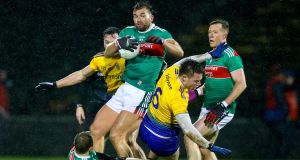 Ye gads. Mayo and the usual hyper-drama. Roscommon hopped over the border and came desperately close to their first league in Pee Flynn country since 1988. But its hard to break tradition around this hard border. The Allianz League opening night finished as weirdly as it begun here, with a late deflected goal by Shane Killoran that surprised everyone, goalscorer included. By then, Mayo had literally weathered a storm and escaped with their first league win of the season in a game defined by mad, mad weather.

The season began with the unpromising news, via the stadium announcer, that a Mayo season ticket had been lost in the stands – before a ball had even been kicked. The more blackly comic observed that the poor soul simply realised that they couldn’t take the hope, the lurching league form, the crashing early-championship disappointment, the wild rides of Croke Park knockout days and, perhaps, a return to the All-Ireland final; the madness, in other words that comes with following the green and red. But there’s something of the Hotel California about Mayo: you can discard your season ticket any time you like. But you can never leave.

Horan: The Return started in an absurd January gale which was matched only by the energy levels of Roscommon’s admirably hungry defence. The newly minted FBD champions came into Castlebar with a point to prove to both their hosts and new manager Anthony Cunningham and used the monsoon to work up a 0-5 to 0-1 lead which really should have been more, given the chances they missed. But the work rate they demonstrated was a signal of intent, with Conor Hussey, Niall Kilroy, Killoran and Gary Patterson prominent in sustained periods of heavy Roscommon cover as Mayo tried to work their short game into the gale.

How bad was the night? Put it this way: referee Barry Cassidy would have been forgiven had he re-emerged for the second half in snorkel and flippers. Mayo went with a forward line which was New Look if not New Wave: Claremorris’ Conor Diskin and Ballina’s Evan Regan started in a full-forward line along with Brian Reape.

Aidan O’Shea drifted to midfield to help win ball on Rob Heffernan’s kick-outs but after that, he formed part of an intriguing four-man attacking diamond with that frontline trio. The formation promised much but the ridiculousness of the west of Irish climate spoiled it.

The game became a lottery of spilled passes and desperate clearances from which the football hung up in the sky for what seemed like minutes on end. Mayo’s rapacious half-back line of Lee Keegan, Colm Boyle and Paddy Durcan were like men mired in quicksand here: they could go nowhere; do nothing except move the ball on.

It goes without saying that the Mayo faithful are patient: one point – a well struck free from Regan – in the first 35 minutes of league final is not going to test their patience unduly.

When O’Shea rumbled forward and successfully invited the converging posse of Rossie defenders to haul him down, Mayo had a chance to reduce the half time lead to three.

“In the context of the game, it could be a big score,” someone remarked, This was true, even if in the context of the season, it wouldn’t matter a damn. The conditions defied Regan anyway and both teams trooped off through the driving gale, leaving the crowd of just under 11,000 in the stadium to listen to the tannoy tunes and maybe question what the whole shebang was all about.

The only drama of the evening lay in whether Mayo could catch Roscommon’s half-time lead. They went about it sluggishly at first and then all at once. Jason Doherty woke the county up with two monster frees and after that, the home team began to dominate.

Donal Vaughan and O’Shea took control of the middle area and Brendan Harrison, utterly in control at midfield, ghosted forward unnoticed to clip a crucial point and then made a one hand-catch while holding off Ultan Harney before setting Doherty up for the score of the game.

Curiously, Mayo’s most fluid patch coincided with a sin-binning for Colm Boyle in the 58th minute. In the next 10 minutes, Mayo reeled off 1-3. Brian Reape’s ferocious strike came from a huge kick-out by Hennelly and an assist from Doherty. With that, Mayo looked to be home and dry.

The sight of Hennelly’s kick-outs covering the entire field was the best advertisement for the crazy wind. Roscommon just about had time to make it work for them when a hopeful ball was sent floating into the Mayo goal. Killoran did well to claim possession and then watched his shot hop off a Mayo body and fall lethargically over the line.

A moan of worry, despair and here-we-go emanated from the Mayo faithful in the crowd. Just a point between them on a treacherous night. Anything, they realised, could happen now. And away they go again.