Walsh Cup: Galway and Joe Canning too good for Wexford 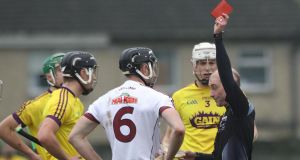 Galway manager Micheál Donoghue questioned the severity of Kilkenny referee Sean Cleere’s decision-making as his side were left with 13 men for the second-half at Enniscorthy on Saturday.

The 2017 All-Ireland champions went on to claim their third Walsh Cup title with victory over Wexford, in the first Walsh Cup final meeting between these sides.

But captain Padraic Mannion and debutant Jarlath Mannion were both shown straight red cards in the first half, while Wexford’s Liam Ryan and Cathal Dunbar were also sent to the line.

“These things happen but you know, for the time of the year and stuff, it’s mad,” said Donoghue.

“I didn’t think a whole lot of them. I’m going into my fourth year, I have never given out about officials but I thought they were harsh.

“You can always tell by the crowd, obviously it’s a tight ground, supporters are close to the pitch, and I just think everybody was bemused with them.

“No there wasn’t (a lot of intensity), but again that’s down to the officials, do you know what I mean. I don’t think there was any mean stroke, there was nothing in it.

“They make those decisions and then the game turns out 14 versus 13, crazy.”

Donoghue fielded a youthful side. Former hurler of the year Joe Canning was joined by Aidan Harte, and brothers Padraic and Cathal Mannion as the only players retained from the team who started last August’s All-Ireland final defeat to Limerick.

But Galway were still too strong at Bellefield. Canning’s 0-13 and Harte’s goal helped secure a six-point win.

“Over the last two weekends you are trying to put a sprinkle of experience with inexperience,” said Donoghue.

“In fairness you could hear them (the experienced players) today, they were vocal, the way they instructed the younger fellas and guided them through the games was exceptional last weekend and again today.

“It’s about giving the younger fellas game time, especially against quality opposition like Dublin and Wexford. Everything now is geared towards the start of the league.

“We have used it for the last couple of years to try get a few new players, obviously it’s building towards the championship but our full focus since we came back has been on 27 January for the start of the league.

“So we’ll be looking for a big week in training and look forward to having Laois in Galway.”

Wexford must re-group before they host the reigning All-Ireland champions, Limerick, at Wexford Park next Sunday.

Davy Fitzgerald side led in the opening quarter but couldn’t retain their title after they trailed by 1-8 to 0-9 at half-time.

They missed a number of goal-scoring opportunities late in the game with Aidan Nolan, Séamus Casey and Mark Fanning (penalty) all guilty.

But one week on from their big win over Kilkenny at the same venue, and having fielded a much stronger starting 15, this defeat will have hurt Wexford more.

“It’s that time of the year as well. It’s hard to see where you are at,” said captain Conor McDonald.

“There are fellas getting a look in. They were the same as well, they were missing as many fellas as we were.

“You just have to put your shoulder to the wheel in them kind of conditions as well. It was tough going.

“The proper competitive games are coming in the next few weeks. Over the years the players have matured a little bit and they are coming back in better condition than they would have in previous years.

“You don’t mind coming training as much if you are not at it at this early in the year.”