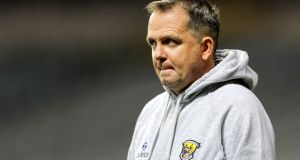 Davy Fitzgerald and Wexford have been drawn to play Clare in the All-Ireland qualifiers. Photograph: Laszlo Geczo/Inpho

Next weekend sees a further nine matches scheduled, as the All-Ireland football and hurling championships hurtle to their Christmas conclusion. By next Sunday evening, just 10 matches will remain in the GAA senior season.

The counties met in this year’s league with Lohan emerging with the bragging rights after a good win in Wexford.

There was no hand shake between the managers that afternoon and asked had they spoken, Lohan simply said, “no” and moved on to the next question whereas Fitzgerald deflected: “Listen, that keeps ye boys busy for the week; it’s nothing to do with me whatsoever.”

On the day, Clare held out for a three-point win, 0-18 to 0-15, playing with just 14 for well over half the match after captain John Conlon received a red card in the 29th minute. Conlon remains injured for the upcoming qualifier.

A familiar feature on the day back in February was the form of Tony Kelly, who has been shooting the lights out in the current championship. In Chadwicks Wexford Park, he scored 0-12, including two from play and has averaged 0-15 in his two championship matches to date.

Historically, the counties have met six times in the qualifier era and the only win to date for Wexford was coincidentally when Fitzgerald was managing Clare, who at that stage were All-Ireland champions, after a replay in 2014.

The other qualifier pairing, Cork v Tipperary, is a regular feature of the Munster championship where they have met 10 times in the past 20 years. Three previous meetings have been in the All-Ireland stages and in three different formats.

Six years ago Tipperary gave then Munster champions Cork a comprehensive beating in the All-Ireland semi-finals whereas, in 2007, Tipp surprisingly won a group match in the round-robin qualifiers and three years previously Cork were winners - en route to All-Ireland success - in a knockout qualifier in Killarney.

Meanwhile in Ulster football, the venues for the weekend’s semi-finals have been announced. Champions Donegal face Armagh in Kingspan Breffni Park on Saturday and on Sunday last year’s finalists Cavan play Down in Armagh’s Athletic Grounds.