Jordan Morris was impressive in scoring 3-4 on championship debut 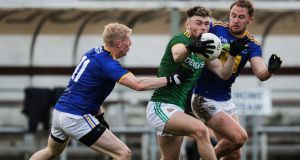 Meath’s Jordan Morris is tackled by Mark Kenny and Dan Healy of Wicklow during their Leinster SFC quarter-final clash in Aughrim. Photo: Inpho

When the case is next being made for the provincial championships to be scrapped and for teams of similar standards to face each other more often, they will present this Leinster SFC quarter-final game as exhibit A.

A powerful Meath side that operated in Division 1 all year and in the Super 8s in 2019 came to Aughrim and swept Wicklow, recently promoted from Division 4, aside. And that was pretty much that.

The finer details include 3-4 for Jordan Morris on his Championship debut and goals too for fellow Championship debutants Mathew Costello and Cathal Hickey while joint captain Bryan Menton and sub Joey Wallace also hit the net.

While this was Meath’s first win in 11 League and Championship outings, stretching back 16 months to their defeat of Clare in the 2019 qualifiers, their performances had been generally good against the very top teams, drawing with Monaghan last month.

They brought a greater physicality and speed of movement to bear on this contest early on with Meath’s first two goals coming as a result of turnovers.

They led by 12 points at half-time and slammed in four more goals late on as their subs provided fresh punch and menace with Morris converting two stoppage time penalties won by the speedy Wallace.

Meath’s reward is a Leinster semi-final next Sunday at Croke Park and, while Wicklow’s season is over, it will still go down as a successful campaign following promotion.

“We were just leggy I felt, very leggy,” said Wicklow manager Davy Burke. “And they’re a top side, a top team. When you’re coming up against the Donal Keogans of this world they’re very, very hard men to stop.”

Burke could have added Morris to that category because he oozed quality throughout and will surely be a marked man next weekend.

An U-20 earlier this year, the Nobber forward scored 0-2 and then 0-7 as a sub against Dublin and Monaghan in the League, earning him his Championship spurs and he didn’t disappoint.

Is he ready now to deliver at Croke Park?

“I guess we’ll soon know, I won’t know until next weekend,” said Meath manager Andy McEntee. “Look, no more than anyone else he’s worked extremely hard and got himself an awful lot stronger and he’s in good shape, like the vast majority of the squad so we’re glad that he’s playing well.”

Meath led 3-6 to 0-3 at half-time and while Wicklow improved in the third quarter it was only staving off the inevitable and Wallace, Hickey and then Morris twice from the penalty spot, all added majors.