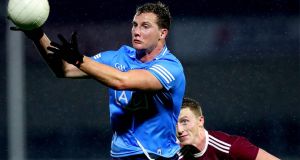 Dessie Farrell’s first championship venture ended in the predictable double-digit victory in MW Hire O’Moore Park on Saturday evening. Did we learn much more about Dublin’s likely trajectory in this year’s championship? Not really. As a stress test it was missing a vital ingredient.

The champions took early control and built an impregnable lead. As ever, Dean Rock’s impassive free-taking exerted its demoralising impact on the opposition, and the first half ended with the team having registered 15 points and two wides.

Ciarán Kilkenny was greatly in evidence and finished with five from play in one of those familiar “sleeves rolled up” contributions that saw him range as far as his own full-back line when required.

Inasmuch as expectations were challenged, it was in Westmeath’s wholehearted resistance in a match that they realistically entertained no prior hopes of winning; had any irredeemable dreamers been on board, even their ambitions must have died in the first quarter.

They defended with determination in the first half, Kevin Maguire excellent at full-back and Killian Daly doing exhausting work, shuttling backwards and forwards. The backs and team were in general alert and committed, getting in blocks when the champions dawdled in possession.

But there was no evident sea change in the way Dublin went about their business, patiently recycling ball, probing for an opening and, as soon as the opposition were off balance, rattling them with flurries of scores.

By the 24th minute every forward had scored from play and by the end of the match 10 Dublin players had done so. The pressure of trying to hold out forced Westmeath into mistakes, with turnovers helping to fatten Dublin’s account.

Manager Jack Cooney lamented afterwards: “They won 10 of our kick-outs and scored eight points off it so that really summed it up in the first half.”

When Dublin hit their stride they looked sharp and accurate. Seán Bugler has been on the radar for the past year, and started against Tyrone in the Super 8s dead rubber in Omagh 15 months ago, but this was his first front-line experience and he acquitted himself well with a couple of early points and a busy performance until replaced at the end of the third quarter.

Making a debut at centrefield was another of Farrell’s under-21 alumni, Tom Lahiff from St Jude’s, who played the grade in 2016 – his athleticism powered by Duracell to the extent that he started all matches and was never replaced. On Saturday he was comfortable with the workload and will presumably get further chances to prove himself at the top level.

The really creditable thing about Westmeath is that even though their constant defending looked to have left them semi-exhausted by half-time, they defiantly posted a wonder point from centrefielder Ray Connellan out on the left wing and dug in during the second half, so that the nine-point deficit deteriorated by only two.

John Heslin shot another startling score in the 44th minute and two minutes later Maguire turned over Kilkenny – little victories but necessary acts of self-respect. They even finished more strongly and James Dolan would have had a goal but for Robbie McDaid’s determined block, showing that the champions hadn’t completely switched off.

There was a rare intake of Dublin breath when Eoin Murchan had to leave the field in the 66th minute, but his problem was revealed as cramp rather than anything more serious.

Afterwards Farrell acknowledged that it would be difficult in the rat-a-tat championship for players to break into the panel, but he said that familiar faces Michael Darragh Macauley and All Star Paul Mannion were on their way back and another All Star, Brian Howard, came on as a replacement.

“It’s good to get up and at it,” said the Dublin manager. “It’s a championship game in a very different championship. I thought Westmeath kicked some fantastic scores. We knew beforehand they had a bit of firepower and were capable of doing a bit of damage if we weren’t on the money, but thankfully we were well focused and our heads were in the game and we got the result.”

Cooney was not unhappy – hardly surprising given that Westmeath’s losing average in the fixture over the past five matches had stood at 21 points – and realistically pointed out that his team had different priorities coming into the intercounty resumption.

“So when the fixture was scheduled initially, we really set ourselves up as win, lose or draw this game, it was about the next game. It was about showing a bit of character to respond from possibly a defeat like this, you could say, but we were denied that opportunity [with the cancellation of the All-Ireland qualifiers].

“When we came back in September, our main focus was on the first league match so we literally only prepared two weeks for this Dublin match because we wanted to maintain Division Two status at least. That’s a good platform for us to develop and progress from because you don’t make up the big gap on the likes of Dublin overnight, a couple of weeks or one season. I think it has to be a real long-term plan. So that’s the way we went about it.”