After Fungie, Kerry’s year gets even worse as Cork strike at the death 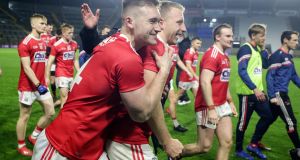 Say what you like about penalty shootouts but the threat of them alone seems to be enough to keep this championship on a knife-edge. For Clones last week and the Gaelic Grounds in Limerick on Saturday, see Páirc Uí Chaoimh on a Sunday teatime. In a world where open play comes ribboned with this much drama, it’s as if the teams have decided that penos would be a downright vulgar addition.

The particulars of this one were exhilarating to behold. In the last seconds of the last minute of injury-time of extra-time, Luke Connolly skied an attempt to send this Munster semi-final to spot kicks. Luckily for him, it dropped in the Kerry square where Mark Keane was tussling with Tommy Walsh.

So now you had it. Aussie Rules players past and present pushing and pulling at each other with the season suddenly on the line. Walsh seemed to get under it and slightly misjudge the flight, so much so that Keane was able to take the ball on his chest and drop it to his toe almost in the same motion. The net danced and the Cork sideline erupted. Unbelievable.

Kerry are out. For the first time since 1993, their campaign has lasted just a single match. Peter Keane and his generals will presumably take plenty of heat over the rest of the winter for the way Kerry set up here but the cold truth of it is that their shooting let them down at precisely the wrong time.

David Clifford and Seán O’Shea returned a meagre six points from 15 scoring chances. Clifford landed one unearthly point in extra time but followed it up with two schoolboy misses. David Moran dropped two short as time ran down when neither shot was really on. Everything added up in the end.

For Cork, eight years of subjugation end in a finger snap. As with Tadhg Murphy in 1983, they found the best way to beat Kerry is to bury them with a goal when there’s no time to respond. They were very much the equal of Kerry for most of the way, with Connolly nailing a couple of terrific frees and Seán Powter indefatigable throughout.

This was November football to the nth degree. In the moments before throw-in, the officious-sounding chap in charge of the Páirc Uí Chaoimh tannoy asked three times for the players to take up their match positions, which is one of the Covid guidelines designed to avoid huddles. In fairness to the players, they did so to the letter - the Cork lads all stood at their end of the pitch, the Kerry players at theirs. If the Covid guidelines imagine the old 6-2-6 formation, they might need a little updating.

A couple of monsoons swept through the marina and the surface of the pitch was like glass at times. Scores weren’t so much earned as ploughed. All in all, it was a tremendous slice of winter fun.

The sides were level at 0-2 apiece at the first water-break and 0-5 apiece just before half-time. A late burst by Cork got them to the break a point ahead but it was heavy going. Ronan Buckley and Diarmuid O’Connor were getting through a world of work for Kerry, Ian Maguire and Ruairí Deane were seeing them and raising them for Cork.

On a day when a goal was always going to be worth more than three points, there was crucial intervention at either end. Michael Martin dived full length to save from Brian Ó Beaglaoich after 14 minutes, with Buckley swishing over the rebound for a point. The young Kerry wing-forward was soon pressed into action at the other end, sliding in at the last to block Brian Hurley as the Cork full-forward pulled the trigger.

For all that Cork played most of the football early in the second half of normal time, they came out badly paid for it. By the time the second water break came around, they were only 0-7 to 0-6 up - and lucky not to be behind after a stunning Clifford effort clipped the angle of post and crossbar and deflected wide.

And when Killian Spillane exploded off the bench to nail a couple of smart scores, it looked like Kerry were stretching their legs. O’Shea was quiet all day but finally landed a free and followed it up with one from play. But Cork weren’t letting go and frees from Connolly and Mark Collins sent it to extra-time, 0-10 to 0-10.

Spillane continued his flawless afternoon with two more well-taken points and Clifford landed one from the gods. But the boy prince also kicked away an easy chance to take a mark in front of the posts soon after and missed his second 20-metre free of the day before the end.

By contrast, Connolly speared a pressure kick from the left sideline in the 87th minute to leave one between the sides. And though it seemed he had fluffed the clutch kick to keep Cork alive, Keane had other ideas. His goal puts them into a Munster final, with endless possibilities opening up in front of them.

As for Kerry, first Fungie and now this. Nothing ever lasts forever.