Cork marshal their forces to keep Dublin on the back foot 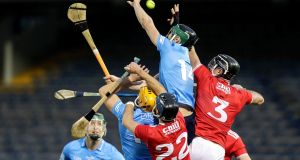 Dublin’s Ronan Hayes and Eamonn Dillon with Stephen McDonnell and Colm Spillane of Cork during their All-Ireland SHC Round 1 qualifier at Semple Stadium on Saturday. Photograph: Laszlo Geczo/Inpho

Cork manager Kieran Kingston felt that his team benefited from more time together as they saw off Dublin at Thurles on Saturday to progress to the second round of the All-Ireland qualifiers.

A week previously, the Rebels were well beaten by Waterford in the Munster championship at the same venue, with the Déise showing the effects of greater preparation as their county championships had ended before Cork’s.

This time, Cork – with five changes from the Waterford game – led all through against a Dublin side that struggled to match the good display of the second half of their defeat against Kilkenny. It allows Kingston and his management team at least another week to fine-tune things.

“We’d obviously love to have more time,” he said. “That’s not passing the buck in any way, the buck stops with me, but the more preparation, the more work you can do.

“The nature of the county championships in Cork meant we had less than three weeks with the lads before the Waterford game. Nine of the lads who played today had county finals four weeks ago or so, we had to give them a bit of time off so we’ve had three weeks or so with them.

“There’s a massive difference in intensity between those club games and county games, and it takes a while to adjust to that.”

Cork led by 0-4 to 0-3 after eight minutes when they made a decisive burst as two players making their first championship starts combined, with Jack O’Connor setting up Declan Dalton for a goal. The lead was 1-6 to 0-6 at the water-break, with Donal Burke the primary Dublin scorer, but Patrick Horgan extended Cork’s advantage with his first point and added another after Seán O’Donoghue had made an important intervention to deny Eamon Dillon a goal chance.

After Cork had the final three points of the first half, through Shane Kingston and Robbie O’Flynn – who finished with four and five points respectively – and Horgan, they were 1-13 to 0-10 in front. Kingston extended the lead to seven early in the second half, but Dublin refused to die, and Burke might have had a goal but for a good Anthony Nash save while Cian Boland and captain Chris Crummey (two) had points as they stayed in touch.

Cork, with Mark Coleman excelling in defence and Luke Meade prominent in midfield, had the greater scoring power, though, and points from O’Flynn were allied to Horgan’s frees and one from the hardworking Séamus Harnedy as they moved 10 points clear, 1-24 to 0-17, by the 62nd minute. Dublin did eat into that deficit in the closing stages with frees from Burke and Crummey’s third point, but they never looked like getting the goal that would be necessary to overhaul Cork.

While he was disappointed with the result, Dublin manager Mattie Kenny was proud of the efforts of his charges in a strange year.

“When you’re in a competition like we are now, you want to go and compete and do the best you can,” he said.

“Once the competition went ahead and once they start out there playing, every day we go out, that’s why I’m so proud of these guys and the character they showed in difficult times in the last few weeks.

“They never backed off, they kept coming, even there tonight in that second half, even though Cork had a good lead, our guys kept pushing and kept coming. Subs came on and did a really good job, they tried to get us back into the game.

“We’re now in early November, the season is over for our guys tonight. We’re disappointed with that and new year isn’t too far away.”