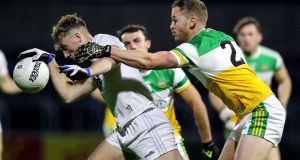 Kildare were given a major fright before booking their Leinster semi-final place against Meath when they edged out a very brave Offaly in Portlaoise’s O’Moore Park.

The four point winning margin does not tell the full story of this game and while they were worthy winners, it could very easily have slipped from their grasp.

Kildare kicked 14 wides compared to just three for Offaly and that does tell a tale but this was a very close run thing. There was just a point in it, 0-16 to 0-15 with five minutes left and a shock win was within touching distance for an Offaly side who never gave up.

Kildare got four of the closing five points to scrape across the line but they were certainly very relieved at the final whistle. They won primarily because of super displays from full forward Darragh Kirwan and midfielder Kevin Feeley.

From the throw in, it was clear that this would be no walk in the park for Kildare as Offaly competed very well in every aspect of play. Working ferociously hard, they ensured that nothing came easy for Kildare and it all made for a very entertaining opening 35 minutes.

Kildare did cause some problems for Offaly as they directed high ball in on top of their full forward line, searching for marks. Kirwan was excellent in there and he kicked four fine first half points from play.

Kildare also had a slight edge at midfield where Feeley and Aaron Masterson won some great ball but Offaly’s work rate and ability to turn over ball ensured that it was very close to 50/50 in general play.

Kildare led by 0-10 to 0-9 at half time thanks to Kirwan’s injury time point but it was very delicately balanced at this stage. There were a couple of times when it looked like they might pull clear but the gap was never wider than three as Offaly dug deep.

A Niall McNamee free and Farrell ‘45’ had Offaly on level terms as it drifted into injury time and despite Kildare edging in front, it was very much all to play for in the second half.

While Offaly remained competitive, Kildare got on top as the second half wore on. There was still a point in it, 0-12 to 0-11 after 42 minutes but then the Lilywhites began to turn the screw. Masterson’s excellent point edged them two clear and then Kildare goalkeeper Mark Donnellan made a crucial save from a Bernard Allen goal chance.

Kildare took advantage and they finally edged three ahead with Ben McCormack’s excellent point and Jimmy Hyland put them four ahead at the water break.

It looked like Kildare might pull away but Offaly refused to give up. They got the gap back to two, the impressive Kirwan responded, and then they got two more to reduce the deficit to one. But there would be no more drama as Kildare finished the stronger.