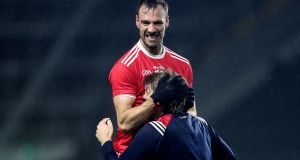 An hour after it was over, a line of cars had gathered out on the Monahan Road, just by the entrance to Páirc Uí Chaoimh. You wouldn’t say there was many of them, maybe less than a dozen altogether. But they were there and they were loud and they were never more alive.

Though they hadn’t been allowed into the stadium to see the first Cork championship win over Kerry since 2012, there was nothing to stop them coming down to wave their flags and beep their horns at the players as they came out the gate. They had their doors open and their radios on full blast, blaring The Banks out into the chill of the November night. Just another slice of surreality in a championship that is serving it up by the bowlful.

A goal in the 93rd minute from substitute Mark Keane gave Cork a 1-12 to 0-13 victory and ended Kerry’s All-Ireland challenge before it ever got the engine turning over. Played in the usual horror-movie conditions, the game had been level on eight occasions before seemingly falling Kerry’s way in extra time, thanks mostly to Killian Spillane, who scored four points off the bench for Peter Keane’s side.

But under Ronan McCarthy, Cork have become commendably hard for the elite teams to shake off, and after eight years under the yoke of successive Kerry sides, they found the killshot in the sweetest way imaginable. Luke Connolly had been mostly faultless since coming into the game, but his attempt to send us to penalties was skied and dropped short. The ball went down into the Kerry square and into the arms of the best story on the pitch.

Glitch in the system

Mark Keane is an aberration, a glitch in the system. This was his first-ever senior appearance for Cork and his first time in red since the 2018 Munster U-20 final. The AFL fairies had spirited him away in the meantime, and just three weeks ago he signed a new two-year contract with Collingwood, which would ordinarily have ruled him out of a game like this. But as Ronan McCarthy told us afterwards, he is a Cork player too. Always has been.

“It’s funny the way things work,” McCarthy said. “I suppose we had no hesitation in bringing him in because Mark has huge interest in Cork football. He’s played underage all the way up and even when he’s been away he’s been interested in the team and stays in touch with us. And the minute he was back [for the winter] he wanted to play.

“We brought him in and it was evident to me he was going to be an addition to us. And the way it worked out today was great. The first thing is the player wants to play – that’s the first thing. And then the second thing is that we did our business properly with Collingwood.

“We sought permission from them for him to play and they gave it to us and we’re very grateful for it. But ultimately, Mark has a huge interest in Cork football. I think he’s back about six weeks, but obviously he needed to self-isolate when he was back. He’s back nearly as long as we’re back, but obviously he couldn’t train with us the first couple of weeks.

“I suppose the goal at the end even shows, and I think it was Tommy Walsh actually inside under him as well, he’s a great target for long balls. He’s a good passer of the ball. He’s a great target man, great physical presence, and, look, he has just added to the quality and depth to the group.”

Cork needed this. They have been coming for a while but have rarely looked like getting close to anything worth calling a destination. They rattled Kerry last year and followed it up by giving Dublin plenty of it in the Super 8s, but it was ultimately empty calories without the nourishment of a serious win. Now they have one, who knows where they can go?

“Cork haven’t beaten a top-eight team, never mind a top-tier team, since 2012,” McCarthy pointed out. “So it’s brilliant to make the breakthrough and it’s great that the players got what they deserved. And I think the manner of the win as well, that we were behind in normal time and got back. The way we won it is testament to the group.

“We have to get back down to earth very quickly with [a] game coming up in two weeks, but we also have to enjoy the victories when they come, particularly a victory of that nature against a top, top side. I’m delighted with the victory, I’m delighted with the players. We never got too excited in days we were beaten, and there were very dark days. Let’s be fair – this team were beaten by 17 points two years ago, 15 by Tyrone, relegated to Division Three.

“So we just felt we needed to keep things steady and keep going in the right direction, because we felt the talent was there and the ability was there. But obviously at some point their confidence was shattered from various games.”

A day like this goes a long way to stitching it back together.