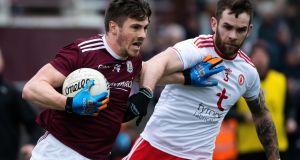 There is no disguising it now. Galway belong to the list of contenders intent on knocking Dublin off their All-Ireland perch. An irresistible attacking display yielded 2-25 for Padraic Joyce’s team in Tuam Stadium on what was a dark day for Tyrone.

A harsh red card for Kieran McGeary made their immediate task more difficult but the sight of Cathal McShane stretchered off with a suspected broken ankle has longer lasting consequences.

Weirdly, Tyrone trailed by just three points after 50 minutes but, down to 13 men, suffered a collapse in the final quarter of what Mickey Harte conceded was “a massacre of a beating.” It finished 2-25 to 0-12. Now Dublin are coming down the tracks – or, more accurately, up the road, to Omagh, next Saturday night.

“We need to dig deep and raise our spirits,” Harte said. “Everyone is very down at the outcome of that game – at both the score line and the loss of Cathal. That has an awful impact on players who play around him and with him.”

But the Joyce factor is telling in the west. By quarter past one the maroon-painted bleachers were wedged, the Galway players were warming up on the stone chippings behind the dressing rooms and they were playing Macushla – the John McCormack version, of course – on the tannoy. In the year of our Lord two thousand and twenty. Never change, Tuam. You can laud Olympic stadia and the great football houses of Barcelona and Liverpool but the old shack in Tuam town is to sports stadia what El Bulli was to the restaurant scene. When you got it, you got it.

As an added bonus, the rain stopped falling in Galway for the first time since Nollaig na mBan and on a dry afternoon, Galway were in a mood to sparkle. 1-8 for Shane Walsh was the pick of a dazzling array of attacking turns.

“Our goal is to bring back in the supporters and there’s way more support coming in each day,” Joyce said.

“But we didn’t envision to win the game by so much. There’s a number of factors in that – the sendings off and unfortunately Cathal McShane got a nasty injury, the poor guy because it didn’t look great. It’s disappointing from Tyrone’s point of view to lose the game by so much and to have such a nasty injury to one of their main players is not good for them.”

Galway’s consistency is the most straightforward story in division one, which has become predictably intriguing at the midway stage. Donegal went down late in Croke Park against Dublin on Saturday night after another promising performance which yielded nothing and revolved around the controversial late dismissal of Michael Murphy, their talisman. He was given a second yellow and red card after an altercation with Dublin defender John Small which appeared like a deliberate provocation and entanglement.

That defeat leaves Donegal in a vulnerable position, along with Mayo who were dispatched with ease by an impressive Monaghan performance in Clones. Meath’s taxing return to division one continued with a loss away to Kerry. As ever, the league noose tightens.

Limerick’s fizzing league form continued as Aaron Gillane posted 0-13 of their 0-29 total in the pick of the division one hurling ties. Cork wore their commemorative black jerseys to honour the centenary of the deaths of the city’s mayors, Tomas MacCurtain and Terence McSwiney and fired 2-21 but struggled to live with the velocity of Limerick’s attack. Pat Horgan pitched in with a phenomenal 0-17 for Cork, including 15 frees. Meanwhile, Waterford’s Peter Hogan fired a memorable score to give Waterford a one point win over Galway in Walsh Park.