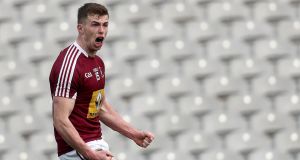 Westmeath wrapped up the Allianz Football League by claiming the last title remaining in the Division Three final on Saturday in Croke Park. Left over from the finals weekend because of weather re-scheduling, the match itself never rose above that suspicion of afterthought, especially as the teams will be meeting again in the Leinster Championship in seven weeks’ time.

Its limitations notwithstanding, the match gave a good snapshot of the two teams heading into the spring break. The winners had the more cautious system, minding their defence and hitting sharply on the counterattack but Laois started both halves the better team and will be disappointed not to have made more of their chances, as evidenced by 14 wides.

The sense of adventure embodied by the wandering instincts of goalkeeper Graham Brody was at times infectious, with his opposite number Eoin Carbery also indulging himself a little. But the climate for such things dropped below even the chilly ambient temperature in the stadium when one Brody sortie ended with his getting turned over around midfield on the hour.

Westmeath went long and expertly worked the ball to Ger Egan and in the form he’s enjoyed this year, the booming finish to the net – manned only by a solitary defender – was all but guaranteed.

Laois rallied but trailing by six in the closing minutes, they had too much to do, even though a couple of frees by Donie Kingston and a 45 from Evan O’Carroll halved the deficit. The frantic hunt for a goal was formally ended when Westmeath full back Ronan Wallace claimed a speculative ball in the dying seconds.

Laois had started well though, leading for the first 20 minutes and denied a goal when Paul Cahillane shot wide under pressure from Boidu Sayeh in the 16th minute after dummying his way into space.

O’Carroll, Kingston and Eric Lowry got the early points as their opponents struggled to kick-start their own attack.

Eventually Westmeath’s more forensic defending got the upper hand. They were content to filter the opposition attacks out to the wing and the quality of their man-to-man marking was high – Sayeh in particular staying tight on Cahillane and showing excellent powers of recover on the odd occasion he was beaten.

The problem for Westmeath was that although they were tightening at the back the delivery into the forwards was frequently poor but eventually they began to get traction. Egan had to score their second point twice, advantage having been terminated as he kicked over the bar in 19th minute before kicking a hard enough free.

They got a run on the scoreboard with a great point, kicked by Ronan O’Toole, after a four-man move initiated by Wallace at the back.

Leading 0-7 to 0-5 at half-time, Westmeath’s niggling problem was indiscipline, which cost them two black-card absences and although both James Dolan – and after half-time Sayeh – could question the precise infraction which triggered their punishment, the calls were probably justifiable if harsh.

There were further black cards for Sam Duncan and Laois’ Damien O’Connor deep into injury-time but they had no material impact on the game.

The earlier sanctions meant Westmeath played more than a quarter a man short and Laois took advantage after half-time to regain the lead three times in the third quarter. They attacked well – Mark Timmons up from full back to kick a 40-metre point – but never shook off their opponents, who disguised their deficiency with piercing breaks from defence, frequently orchestrated by John Heslin and Kieran Martin.

O’Toole kicked a wonderful point in the 43rd minute – harnessing the wind to drift over a shot from the left wing – to equalise at 0-8 each.

By now Westmeath had corrected their most besetting issue in the second half, the tendency to turn over possession, which had gifted a supply of ball to Laois, and their scoring efficiency was well superior, just five wides during the afternoon.

The title is of course less important than promotion to Division Two for both teams but Jack Cooney can reflect happily on the first four months of the year, which has yielded both pieces of silverware from the two competitions they have entered, the O’Byrne Cup having preceded the league success.

The counties meet again at the end of May but Westmeath have established a winning pattern.