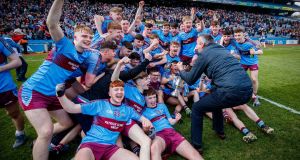 St. Michael’s College, Enniskillen celebrate with the trophy after their victory over Naas CBS in the Hogan Cup Final at Croke Park. Photograph: Oisín Keniry/Inpho

St Michael’s College, Enniskillen lifted the Hogan Cup for the first time in their history after a narrow one-point victory over Naas CBS at Croke Park on Saturday.

St Michael’s were very impressive throughout this game and the competition as a whole, with the Fermanagh side possessing some wonderful footballers such as Michael Glynn and Darragh McBrien.

Fermanagh football has made huge strides in recent years and this will be a massive boost to football in the Ulster county.

It was the Kildare school who opened the scoring courtesy of a point from corner forward Eoin Conneff, which was quickly cancelled out after a free from Glynn.

Both sides traded further scores before Naas CBS registered the games opening goal, with Conneff finding the target after a poor kickout to give his side a three-point lead with 13 minutes played.

St Michael’s responded superbly to this set-back with Glynn slotting a placed-ball effort, before Darragh McBrien found the back of the net with a great finish to beat the goalkeeper and give the Ulster side a one-point lead.

The Fermanagh outfit held a 1-6 to 1-4 lead at half-time, after an excellent first-half display from Dominic Corrigan’s charges.

Conor Love’s effort gave St Michael’s a four-point lead heading into the final stages of the match, but Naas CBS came right back at them, registering three successive scores to reduce the deficit to one.

A further score from Love in the fourth minute of stoppage time gave his side breathing space, but Naas were awarded a short-range free in the 66th minute, which Mikey McGovern put over the bar.

A late effort from Alex Beirne sailed harmlessly wide and Rory Hickey blew for full time shortly after, much to the delight of the St Michael’s contingent.

1 David Humphreys: Georgia simply can't be dropped in at the deep end
2 Sordid murder of hurling brothers still resonates in south Galway
3 Ireland’s clash against Georgia will be an important audition
4 Ireland’s work-ons: Four things Andy Farrell needs to address
5 It’s good to have Richie Hogan back, he was missed
Real news has value SUBSCRIBE