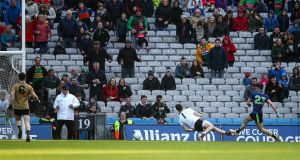 Finally, it all came together for Mayo. A chilly afternoon in Croke Park ended with the Sawdoctors blasting out of the PA system and the green-and-red troops lifting the Allianz Football League title – their first success in a national final since winning the same trophy in 2001. Since then, they have left empty-handed after nine deciders, six All-Ireland and three league.

It was a great triumph for the players, many of whom soldiered through those disappointments – replacement Andy Moran featured in eight of them, all bar the 2012 All-Ireland for which he was injured – and the management of James Horan in the first year of his second tour of duty.

Aidan O’Shea’s afternoon ended in a second yellow card, along with Kerry’s Diarmuid O’Connor, in injury-time but he had worked tirelessly and provided great leadership in the critical third quarter when the match was turned off its initial trajectory.

It was, however, the Mayo Diarmuid O’Connor who deservedly received the Man of the Match citation after a major scoring contribution in the final quarter, hitting two trademark beautifully-struck points and getting in between Seán O’Shea and Shane Ryan in the Kerry goal to fist Paddy Durcan’s kick – possibly an errant shot – into the goal.

The result was well merited. Only for Ryan’s shot-stopping, the data on Kerry’s improved defence would have looked even worse.

This victory showcased the legendary resilience of Mayo but with a well-tutored sense of when to apply decisive pressure. After a fairly unpromising first half when they conceded two goals and looked shot-shy, albeit into a windy and unoccupied Hill goal, Mayo responded impressively after the break, taking command of the match and scoring three goals, the last one a coup de grace by replacement Ciarán Treacy in the third minute of injury time.

On a cold, sunny and windy afternoon, the winners ultimately used the elements more effectively, piling pressure on Kerry in the second half with some exceptional long kicking, highlighted by Aidan O’Shea’s drone-like delivery to James Carr just after half-time, which drew one of  a number of fine saves by Shane Ryan and culminated in Darren Coen kicking a point.

Kerry manager Peter Keane felt afterwards that his team hadn’t made the most of the wind-assisted first half but was reasonably satisfied with a campaign, which has seen improvement and the deployment of a number of newer players.

The concession of three goals spoiled the defensive stats but the table-toppers in Division One responded strongly at the end to try and claw back the result. The damage had been done first in a rudderless third-quarter display in which they lost a lot of possession, often carelessly, and the initiative and secondly by getting out-scored 0-3 to 2-2 in the final quarter.

If Mayo as a county can breathe a sigh of relief that national silverware is at last going to sit in the trophy cabinet, for goalkeeper Rob Hennelly the match amounted to personal redemption on an almost Hollywood scale.

His travails in 2016 when introduced for the dropped David Clarke before the All-Ireland replay were amplified all over social media and his has been a tough road back. Clarke was injured for this but manager James Horan did reference the league match against Dublin in Croke Park in which Hennelly had been his team’s only standout performer.

In the 71st minute he came between Mayo and probable defeat. They led by two, 2-11 to 2-9 when Stephen O’Brien came in along the end-line, popped the ball across to David Clifford who rose to get a hand to it and steer it towards the net.

Hennelly saved point-blank and did enough to deflect the ball into the air for Colm Boyle to gather off the line and clear. Clifford cut the deficit to a point a minute later but Treacy’s goal, carved out by Andy Moran’s awareness in putting him in behind the defence, put a stop to any Kerry notions of late recovery.

In the first half, Kerry had the sharper edge, typified by their goals. Clifford caught the ball in the left corner in the 14th minute, attacked and when his progress was halted managed to slap the ball away to Gavin Crowley whose firm shot to the net left Hennelly unsighted by a thicket of defenders.

The high point of the Kerry afternoon was a flowing move from Diarmuid O’Connor, Dara Moynihan and Stephen O’Brien, who finished well for a five-point lead, 2-3 to 0-4.

At half-time there were four points in it but Mayo stepped up a gear in the second half. James Carr stormed into the match just after half-time. The first player from Ardagh, a junior club, to play senior for Mayo he was a late addition this league, making his league debut in the final, but Horan praised his contribution and confidence on the ball and he kicked a couple of points in the 35th and 38th minutes before only Ryan’s save prevented him from adding a goal.

O’Shea’s frees and Gavin Crowley’s point restored Kerry’s lead but Mayo cracked the match open in the 48th minute. Matthew Ruane, whose goal had won the match when the counties met earlier in March in Tralee, played a one-two with Coen and confidently repeated the dose to cut the margin back to two.

Paul Geaney and James O’Donoghue both made return appearances for Kerry and the former kicked a point in the late but futile rally and yet Mayo’s defence held.

It is the county’s 12th league title and reinforces them in third place on the roll of honour. In a few months though, the fervent hope surely is that it will have either assumed the status of a welcome harbinger.

1 ‘For 25 minutes I ran out of oxygen’: Pepe Reina on his coronavirus battle
2 Garry Ringrose to stay with Leinster as he signs two-year central contract
3 Dr Claire Molloy: ‘It is a privileged place to be, on the frontline’
4 Australian rugby staring into abyss as another crisis hits
5 Playoffs set to be moved again as Uefa prioritise European club competitions
Real news has value SUBSCRIBE

Wimbledon will not be held this year due to coronavirus crisis 16:51
Playoffs set to be moved again as Uefa prioritise European club competitions 15:59
Harrington would prefer 12 picks over delayed Ryder Cup 09:06
Australian rugby staring into abyss as another crisis hits 09:03
Ringrose set for new central deal; memories of Björn Borg at Wimbledon 06:51
Crossword Get access to over 6,000 interactive crosswords