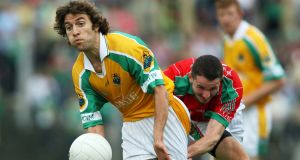 I’ve been wracking my brains trying to figure out how best to explain to people from outside the county how Leitrim folk will experience Saturday’s Division 4 national football league final.

The closest I can figure is that it’s akin to everyone in the county attending the wedding of our best friend. For the squad – the young and inexperienced groom – the day will be adorned with excitement, with a top hat and tails of apprehension and anxiety thrown in to complete the ensemble. For them, the day is all about performing on the big stage and getting the job done. It will pass in the blink of an eye. For the rest of us, the occasion will stretch out felinely, like those sun-kissed carefree summer days our sentimental memories have polished into pearls. It will be filled with family and friends and will end in the wee hours, with our ties around our heads, with us all hoping this happy day is the first of many more to come.

Even as a Leitrim native and former player, it’s difficult not to slip into cliché when describing The Leitrim Experience. Every county believes theirs to be the best and the pinnacle of achievement. And yet, every county player and supporter know in their heart of hearts that club is always trump. Leitrim manages to marry those dichotomous and occasionally conflicting elements of GAA identity to forge a familiarity that fails to breed contempt. We’re one big club.

Leitrim has, according to the last census, a population of 32,044. The world is said to have six degrees of separation. Leitrim has one. (Leitrim people go to extreme lengths to glimpse the driver of any Leitrim registered car, no matter where they encounter it, to see whether they know them. They usually do.) It wouldn’t take too much effort on my behalf to arrange the bulk of the Leitrim population into one Whatsapp group to coordinate arrangements for the weekend’s gathering. The inevitable group title would be ‘Last one out, turn off the lights’. The first message would be one of reassurance to all the Leitrim people that have been in touch this week worrying about accessing tickets. Even if everyone in the county were to attend Croke Park and bring a plus one there will still be room for another 18,212 people. (We’ll call that the Donegal and Meath allocation).

While Leitrim’s paucity of numbers binds those from the county tightly together, it renders us rare (and, we like to think, exotic) to those from outside our borders. Every county compatriot I know has heard this utterance at some stage of their life: ‘You’re the first person from Leitrim that I’ve met.’ We receive it with grace and a little gratitude. What is rare is wonderful, after all. Should they meet a native from Tullaghan and Bornacoola, bookends of the county geographically 95 kilometres apart, a world between them culturally, they can’t believe both hail from Leitrim. (The differences would require a full anthropological research paper to do justice to the topic.)

Over the past 30 years Leitrim visits to Croke Park have averaged out at about one a decade. The biggy, of course, was 1994. It was Leitrim’s annus mirabilis. We didn’t have a whole lot to shout about in the intervening years since Tom Gannon raised the Nestor Cup in 1927. As a stand-alone achievement, for one of our own to go and win the Eurovision, as did Charlie McGettigan on April 11th, would have been cause enough to mark down 1994 as one of the all-time great years. (Incidentally, I lined out with Charlie’s son Shane for the Leitrim U21s that year.) For our Rock n Roll Kids to go on and win the Connacht title – defeating Roscommon, Galway, and Mayo en route – was almost too much to take. We lost the complete run of ourselves. The lads were bigger than the Beatles when the Beatles were bigger than Jesus.

Up to one third of the county’s population – augmented by Leitrim people living here, there, and everywhere – could be in Croke Park this weekend. At least 300 people are known to be flying in from America for the game, the majority from New York.

McLean Avenue, Yonkers, is known as ‘Little Leitrim’ due to the number of the county’s publicans offering sustenance and refuge along the strip. One of them is Seamus Clarke, proprietor of JP Clarke’s, new sponsor of the Leitrim senior football team. During the week I was asked by a journalist about the financial chasm between AIG’s sponsorship of Dublin and the Bush Hotel’s sponsorship of Leitrim (which ended last year following a nine-year partnership). Without any offence intended to AIG, I explained that I would rather wear The Bush Hotel on my jersey.

I know the proprietors, Joe and Rosey Dolan. They served me nourishing dinners after Leitrim games and training sessions over the 13 years I was fortunate enough to represent my county at senior level. I’d safely say they’ve done the same for a significant percentage of the Leitrim population. The Bush Hotel has maintained the Irish tradition of the Teach Aiochta, the ‘house of hospitality’, since the late 18th century. I attended the funeral of the Dolan’s son Andrew, whom I had met on many occasions. He died following an unprovoked attack on a night out in Athlone on December 23rd, 2011. I have watched with admiration, as have all Leitrim people, the Dolans’ efforts to ensure this senseless act was not in vane as they tirelessly promote around the country their ‘Use your Brain Not Your Fists’ campaign. I look forward to catching up with them in Croke Park this weekend.

That sort of association and identity goes beyond a logo. It goes to the very heart of who we are, what matters to us, and what defines us. Research has revealed a coherent sense of identity to be one of the foundations of contentment; meaningful social connections to be key to happiness and positive aging. Leitrim folk always struck me as content and at ease in their own skin. We found ourselves on top of the 32-county happiness table following the 2017 ‘Census of the Heart’ conducted by a cultural group called The Trailblazery Collective. Two years later we find ourselves competing for the Division 4 league title with Derry.

As a trainee hack with the Leitrim Observer in 2000, I was dispatched to interview the retiring county secretary Tommy Moran after a life-sentence of 25-years in the role. I asked him how he maintained during that time his irrepressible appetite for all things Leitrim GAA. His response was as profound as it was simple and could well hold within it the secret to Leitrim’s enduring appeal.