Eoghan O’Donnell: Dublin hurlers are trying to bury the past

Despite a creditable campaign in Leinster, Dubs are blocking out ‘moral victories’ 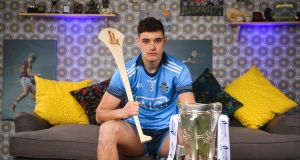 Dublin’s Eoghan O’Donnell at Croke Park where it was announced that Bórd Gáis Energy’s sponsorship of the All-Ireland hurling championship has been extended to 2022. Photograph: David Fitzgerald/Sportsfile

Dublin surprised many in last year’s Leinster hurling championship by how relentlessly competitive they proved in the new, round-robin format. They may have lost three – against Kilkenny, Wexford and Galway – out of four matches but, as by this stage everyone knows, they led each of those matches in injury time.

Maybe surprisingly, nearly a year later, all talk of those close calls has been forbidden in the camp.

Dublin full-back Eoghan O’Donnell was explaining the approach at Thursday’s Croke Park announcement by Bórd Gáis Energy that the company’s sponsorship of the All-Ireland hurling championship has been extended to 2022.

“I mean we put a block on it in terms of the moral victory side of things. We lost by a point in a few games; we were up in the 70th minute – we’re just trying to stay away from all of that and focus on going forward.

“It makes sense that if you’re going to the 70th minute and you’re thinking loads about games where you came out on the wrong side, it can kind of get into your head a bit so we have moved on from 2018 completely and we have a brand new management a lot of players have come back and there’s new players so it’s a different panel there.”

It’s been a great 11 months for Dublin, which wasn’t immediately foreseeable when All-Ireland-winning football manager Pat Gilroy decided to step down after a very encouraging first year in charge of the hurlers. Since then, however, former Galway coach Mattie Kenny, who managed Dublin champions Cuala to back-to-back All-Ireland club titles, has taken over and the county has enjoyed an impressive league.

The competition is being restructured for next year and so there was no promotion from Division 1B but Dublin topped the table after picking up just one defeat and beating league finalists Waterford along the way. They followed it up with a first competitive win against Tipperary in Thurles since the 1940s.

At the heart of the positive displays has been an impressive defence in which O’Donnell has excelled at full-back. In the league semi-final against eventual winners and All-Ireland champions Limerick, he gave a great display in Nowlan Park.

The general assessment of the team is that they don’t have the same impact up front although a number of players have yet to return from injury. O’Donnell is characteristically protective of the team.

“I don’t know. If you look back on a lot of our games; against Waterford and Limerick and Tipperary – we put up some good scores. But we have seven or eight forwards now competing for places: Trollier (Eamonn Dillon) is obviously on form; Oisín O’Rorke, who was unlucky with an injury and then we have the big lads, like Rushie and John Hedgo. So we have a good mix of lads there who are well able to do the business.”

He also tackled the charge that Dublin were a bit too cautious against Limerick, a bit too ready to set up defensively.

“That wouldn’t have been in our mindset going down. We went down to win the game. I think what happened was we actually play a similar system to Limerick. We play our half-forward lying a bit deeper and Limerick do the same so it just ended up that that middle 20 [metres] was very congested.

“Limerick – obviously their game plan revolves around leaving space in front of a very dangerous inside forward line and bringing their players out and put it into space. Seán Moran just played the number six position, like an old-fashioned centre-back rather than following his men out.

“People are entitled to their opinion but we had no intention of going down to play a negative style. We don’t play a sweeper or haven’t. It’s just the way things played out on the day.”

He is asked whether they are now used to the new management.

“I think so but was never going to happen overnight. Change is hard. We haven’t fully settled yet as it’s the first year we have been with Mattie but we are trying to nail down a culture and a system. Mattie has a massive hurling knowledge and brain so it’s been very positive.”

O’Donnell says that Kenny is more hands-on with drills etc than Pat Gilroy last year but speaks highly of the latest football influence, Dessie Farrell, the former All-Ireland under-21 and minor winning manager.

“He’s great to have in and he has looked at culture and is there in an advisory capacity to talk to lads. He’s instilled a belief among us that we are one of the teams that can compete.

“We hit an upward trajectory of form going into the last few games. Although the Limerick game didn’t go the way we wanted it to in the end, it was still a good performance and hopefully we can bring that into the championship.”