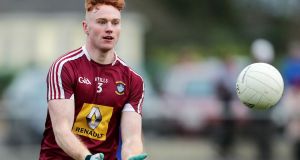 A rather bigger focus than might have been anticipated settles on this year’s Division Three final because of its rescheduling.

This mightn’t be entirely comfortable for the teams either, as they will be going head-to-head in the Leinster championship in a few weeks. Neither will Croke Park be a big deal for two counties who have featured in three of the past four provincial finals.

Both will however be in excellent spirits, having achieved the hard work of securing promotion from the most competitive division in the AFL, and probably happy to let the cards fall as they will here.

There’s also good momentum on either side. Laois have achieved a second successive promotion whereas Westmeath began the year with a first O’Byrne Cup success in 31 years

When they played their regulation fixture in Mullingar, the home side won by three, their scoring options highlighted by Ger Egan, who has been one of the country’s most consistent forwards this year, and John Heslin who was just returning.

The teams’ personalities though are apparent in their statistics. Laois are the highest scorers in the division and play a more attacking game, pushing up on teams and going after them, happy to play an orthodox one-on-one game.

Westmeath are stronger defensively and have conceded fewer than any other team in the division, through the quality of their defenders – such as Boidu Sayeh, Kevin Maguire and Ronan Wallace – and the system they play.

Both managers have also attracted plaudits. John Sugrue took Laois to a Leinster final last year and had come to the role having been involved with his native Kerry’s All-Ireland success in 2007 and moved to Laois in the meantime.

Jack Cooney, for his part, is the first native Westmeath manager in 27 years, having gained experience as a selector years ago in the late Páidí Ó Sé’s 2004 Leinster-winning management team.

Laois welcome back two of their most experienced players, Colm Begley and John O’Loughlin but it may be that Westmeath’s run of form – since the narrow defeat by Down they had to win their last four matches – can be decisive.

– Two schools in pursuit of a first Hogan Cup: St Michael’s have the lengthier pedigree, having lost finals in 2002 and 2012.

But Naas have been very strong in the past two years, becoming the first school to retain the Leinster title in over a decade. The latter’s win over Eamonn Fitzmaurice’s PS Chorca Dhuibhne was impressively complete with Mikey McGovern in lethal form and although they have gone a step farther than last year, only four players remain from then.

St Michael’s are pretty forward-driven as well and early scoring settled their semi-final. Micheál Glynn and Darragh MacBrien are the danger men. Under veteran coach Dom Corrigan, who also managed Fermanagh and Sligo, their time may just have come.

A memorable year for the Roscommon school, who also reached the Connacht senior rugby final and were impressive in beating St Patrick’s, Downpatrick in the semi-finals. The Kerry school conceded four goals to Ashbourne in their semi-final and would need to tighten up.