Rory O’Connor sees pay for play as logical next step 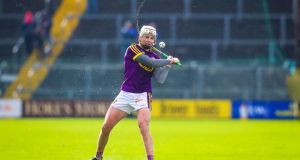 Wexford’s Rory O’Connor: “I’d say when I’m retiring there’ll be lads starting off and they’ll be on a wage, that’s the way I think it’s going anyway.” Photograph: Tommy Dickson/Inpho

At just 20, and in only his third season as a Wexford hurler, Rory O’Connor can already see the writing on the wall for amateurism in the GAA.

The talented young forward has predicted that by the time he’s retiring, in a little over a decade’s time presumably, inter-county players will be paid for their efforts.

It’s a prediction that chimes with the recommendation in Towards 2034 – the 150th anniversary of the GAA, an as yet unpublished report commissioned by the Association, that the payment of an “allowance” should be made to players and managers in the future.

O’Connor made his comments in the context of the recent debate in Cork regarding their club championship structure and the proposal, which was defeated on Tuesday night, that a number of games could go ahead without county players.

For some, this sort of talk is the thin end of a thick wedge that will inevitably drive open the door to professionalism.

“I’d say when I’m retiring there’ll be lads starting off and they’ll be on a wage, that’s the way I think it’s going anyway,” said O’Connor, at the launch of Physio Led Personal Training at Sports Physio Ireland.

“I think it will. It can’t go any further, the levels of professionalism. If it goes any further, lads will nearly have to stop working. You’d be nearly catching up with college work at all hours of the night at the moment, I don’t know how other lads are doing it.

“I know a lad on the team who is doing his chartered exams, he’s working at the moment and studying at weekends. I don’t know how he’s doing it all.”

O’Connor, a finance student, said he doesn’t know what the exact model for paying players might look like but sees it as the most realistic way of keeping future players involved.

“If you’re not training, you’re going to the gym every night,” he said. “I’m a la carte, I’m up in DCU so I can do whatever I want gym-wise any time of the day but lads that are working are getting up early to go to the gym, or they’re going to work early and going to the gym in the evening time.

“We’re training maybe twice in the evenings, a match on the weekend and you’re going to the gym twice a week as well.”

The talented St Martin’s club man revealed how he initially presumed it was a wind up when, studying for his Leaving Certificate, he received a text message from Davy Fitzgerald.

“I replied back, ‘Good man Davy’ with three laughy faces,” smiled O’Connor. “He rang me then in class and I texted Jack, my brother who is involved with Wexford, asking him what’s Davy Fitz’s number. The numbers matched, so that was my call up!”

But O’Connor’s mood darkened when he spoke about the apparent lack of respect that commentators and bookmakers have afforded to Wexford.

Fitzgerald railed at the suggestion that, with no relegation from Division 1A in the Allianz League, the competition mightn’t be as keenly contested and Wexford may see it as an opportunity for success.

Fitzgerald said last month: “I heard this rubbish on the f***ing radio last night and it saying I’m mad to win the league – I couldn’t give a f***, right.”

Wexford have since established themselves in Division 1A of the league yet are ranked 22/1 outsiders for this year’s All-Ireland, only above 1,000/1 shots Carlow.

“You’d read stuff, lads would send stuff on to you showing that you are in whatever position to win the All-Ireland,” said O’Connor. “It would be, ‘You are last, you are 10th, you are ninth’. I saw another thing that ‘With Joe Canning out of the Leinster championship injured, who is going to take the Leinster final?’ Sure we were nearly last in that percentage too.

“That kind of thing is absolutely driving us on. All I know is if we can put 70 minutes together, back to back, it’s definitely within our reach to win a Leinster final this year.”