Super subs get Mayo out of jail against Derry 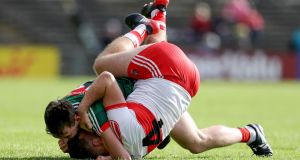 Mayo’s Diarmuid O’Connor with Emmett McGuckin of Derryget to grips with each other. Photograph: Tommy Dickson/Inpho

Mayo’s substitutes provided the unlikely source of salvation for Stephen Rochford’s men, who came within a whisker of being dumped out of the championship by Derry at MacHale Park on Saturday night.

Conor Loftus and Jason Doherty both found the net to turn what looked like a certain defeat into a morale boosting victory for last year’s beaten All-Ireland finalists.

A relieved Mayo manager agreed that it could have been over had James Kielt landed what was always going to be a difficult free for Derry deep into injury-time.

“It certainly could have been all over for us,” admitted Rochford, who was relieved to see the game go to extra-time as his team redeemed themselves by outscoring Derry by 1-9 to 0-1, the teams having finished level at 1-12 apiece at the end of normal time.

“Any time you go into an extra-time period there’s an element of relief. The way in which we drove on in extra-time showed our experience and our level of fitness,” he added.

The inclusion of Aidan O’Shea from the start proved to be a bold decision by Mayo as the Breaffy man had a huge influence on the game in midfield.

But it was Derry who played the better football in the first half and they led by 0-8 to 0-7 having played into the wind with Ryan Bell and Niall Loughlin nailing some excellent points.

When Derry edged two ahead (0-12 to 0-10) with 10 minutes remaining, Mayo, who kicked 17 wides in normal time, looked vulnerable. But Loftus, grandson of former GAA president and Mayo player D. Mick Loftus, was to score a match-changing goal.

Paddy Durcan came up with a big point for Mayo just before the goal and from being a point down, Mayo went three clear, Loftus adding another point, and it looked as if Mayo had weathered the Derry storm.

But there was another twist in this tale as Derry came back in stoppage time to tie the game with a goal of their own, a long ball from Carlus McWilliams flicked to the net by substitute Mark Lynch to send the game into extra-time.

By the end of the first period Mayo had put this game to bed as they took a commanding 2-17 to 1-13 lead, a poor kickout from Derry goalkeeper, Ben McKinless, gifting a goal to Doherty while points from Kevin McLoughlin, Cillian O’Connor and Aidan O’Shea drove Mayo on.

Derry’s only reward was a point from Lynch. They were thrown a lifeline when they were awarded a penalty but David Clarke got down to stop James Kielt’s spot-kick.

Despite losing Paddy Durcan to a straight red card just before the end of the first period of extra-time, following an off the ball incident, Mayo were never troubled as a fading Derry failed to score another point.