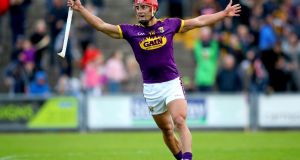 Lee Chin: “We knew they [Galway] were going to be a team to beat if we wanted to get a Leinster title and it just so happens that we have them in a Leinster final.”

It was the outstanding performance of the summer so far. At various points of Wexford’s epic Leinster semi-final win over Kilkenny, Lee Chin’s interventions elevated the whole team.

Example: after the quick-combination two goals – bang-bang – were landed to cut his team’s lead right back into the red zone when they had been leading by eight, there was the extraordinary ball caught over the formidable aerial presence of Cillian Buckley, which Chin then launched for a point into the hostile wind.

In his analysis in these pages, Nicky English said that the Wexford joint-captain (with Matthew O’Hanlon) had “single-handedly steadied the ship. I have seldom if ever seen a more magnificent athlete when it comes to hurling. His influence in the second half of the match was immense”.

The player himself breaks down what is at this stage a legendary play.

“Of course, I think any man that is standing beneath a ball – their objective is to win it. A lot of games I play, I fancy myself under a high ball. I knew that something needed to happen after that goal went in; if nothing happens in this next play, we could see us getting turned over here.

“I just knew we needed to get the next score, needed to win the next ball because if Kilkenny had won that ball and gone down the field and popped one over, they could have just taken it from us. Look, I got myself over to the wing from the puck-out, Mark Fanning played it into my hand, and I just took a shot against a strong wind, probably wasn’t expecting it to go over but luckily it did.”

This Sunday Chin plays his first hurling championship match in Croke Park, as Wexford contest a first provincial final since 2008. The year has been a bit of a blur so far: promotion to the top division, a first competitive win against Kilkenny in Nowlan Park since the 1950s and followed up by this month’s first championship defeat of their neighbours in 13 years.

He is forensic about all of the plaudits that have come his way after the semi-final victory.

“I suppose since the game, I have been getting a lot of praise and stuff. For myself, I just felt that I did what I had to do. I probably wasn’t overly happy with my first-half performance. I only had five or six possessions, wasn’t getting on the ball enough, wasn’t having a massive impact bar my frees. Some of the ball I did get on, I was offloading it or laying it off.

“In the second half, I came into my own. I think the lads around me were phenomenal on the day; our backs only conceded 1-4 from play, they deserve massive credit for that. And look the ball came down my way a couple of times and I caught a few balls out of the air, got on a couple of breaking balls.

“As far as saying was it my best performance for Wexford so far, I think in patches it probably was but as a whole, maybe not.”

Adding to the sense of occasion on Sunday is the unique pairing. For the first time since Galway became part of the Leinster championship, they face Wexford in the final. Twice recently they have been in All-Ireland finals, 2015 and ’12 when they won the provincial title. This year they have already overwhelmed All-Ireland champions Tipperary in the league final.

Wexford won’t be intimidated though. They effectively secured promotion from Division 1B by defeating Galway in Salthill in the second match of the campaign last February. Chin is characteristically measured in his assessment.

“We knew they were going to be a team to beat if we wanted to get a Leinster title and it just so happens that we have them in a Leinster final.”