Cork footballers are much abused but only they can change it 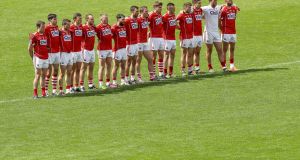 Rebels with a cause. Cork line up for the Munster semi-final against Tipperary. Photograph: Ryan Byrne/Inpho

In Mourneabbey last Sunday night, the traffic sat in treacle a full 25 minutes before throw-in. Mallow were playing Blarney in the Premier Intermediate Hurling Championship, a fixture which, in ordinary times, wouldn’t exactly be expected draw bumper numbers. But these are not ordinary times for Cork hurling.

With the new boy prince Mark Coleman on show for Blarney, the crowd swelled to well over double what it would have been even just six weeks ago. Autographs and selfies married the setting sun afterwards.

Though the decision to keep running the club championships concurrently with the county team’s march to the Munster final was driven by necessity, it has proved a masterstroke.

Crowds are pouring in across the county, surfing the wave of optimism and summer good humour. Glen Rovers and St Finbarrs played out an old-style classic in Páirc Uí Rinn last Saturday night, the Glen keeping their season alive with a last-minute goal. Even with Páirc Uí Chaoimh delayed, the headiness of it all is irresistible just now.

It is self-evidently unfair to turn to the fortunes of the Cork footballers in this context but it is inescapable too. Munster finalists, just like their hurling counterparts. But in the popular imagination, a waste of time. Unloved, unsupported, abandoned.

Overdue a break, as well. A Munster final is great and all but they could surely have done without another trip to Killarney for this one. They’re currently slogging through their longest run of games against Kerry without a win since the early 1980s and by a distance their longest winless stretch behind enemy lines.

Cork have actually gone longer in pure time terms without a championship win in Kerry, failing to record a victory Over There between 1891 and 1945. But the counties only met on Kingdom ground seven times over that stretch whereas the current winless streak runs to 12 games in 22 years. One way or another, a home Munster final in a new Leeside bowl would have been a fillip.

If the inability of the Cork County Board to deliver the new ground on time isn’t the worst thing that has happened to the Cork football team, it still hasn’t gone over well. Relations have been strained on that front for a while anyway, ever since the footballers got a lash of the horsewhip from county board chairman Ger Lane at last year’s annual convention for their indifferent displays in 2016 and a thinly-veiled warning for the future.

“The team is in transition, but we have the players and we should be much more competitive,” Lane declared. “This team is fully-resourced and financed and we must see a major improvement from our team management and players in the league and championship in 2017. Cork football should be in a much better position and questions have to be asked if it doesn’t happen in 2017.”

While the substance of Lane’s speech was hard to pick holes in, it didn’t go unnoticed within the football panel that the hurlers’ lack of success was given a much more tolerant spin. Kieran Kingston’s side had, in Lane’s phrasing, “a difficult year”. Kingston would be going with a younger panel in 2017 and it was hoped that approach would bear fruit. “We have to be patient with a young team,” Lane stressed. No mention was made of their level of resources or financing.

For the record, the average age of the Cork hurlers who started their Munster semi-final was 24.66. The average age of the footballers who started theirs was 26.06. A year and a half is no small difference but it’s not like the hurlers are fresh out of the creche. Nine of the hurlers who beat Waterford have Munster medals and seven have played in an All-Ireland final. Only six of the footballers who beat Tipp have Munster medals; only four have been in an All-Ireland final.

But then, perception is everything. Especially when it comes to the Cork football team. They live a life doomed in the shadows of two glamour sides – the hurlers in their own county, the footballers in Kerry. They must endure in the knowledge that they will never outgrow the former and will only intermittently outdo the latter.

In their current form, it is true that the possibilities for Peadar Healy’s side feel brutally limited on both counts. Cork haven’t had a championship win against a team ranked higher than Division Three since 2013. For a sense of what a stunted level of growth that represents, only six other counties in the land ar without a win against a team from the top two divisions over that spell of time. And they are who you think they are – Waterford, Carlow, Offaly, Limerick, Leitrim and London.

Though it could be argued that it’s really just a quirk of how the fixtures have spilled out over the past four summers, that record does hint at the main reason the Cork footballers get such a hard time of it. It’s not that they’re expected to be All-Ireland contenders every year. They’re just expected to be better than this.

Those expectations aren’t unreasonable by any means. This, after all, is a county that has won seven Munster under-21 titles since 2007.

True, they haven’t converted one to an All-Ireland since 2009 but they were in finals at that grade in both 2013 and 2016. Between 2009 and 2015, UCC were in five out of six Sigerson finals, winning two of them. Even allowing for a proportion of those crops being sloughed off variously to hurling, AFL, soccer and civilian life, they can’t say they’ve struggled for players.

The reality is that they’ve struggled to make players of the players they’ve had. Aidan Walsh was Young Footballer of the Year in 2010 and an All Star in 2012. But apart from a game-saving last 20-minutes against Tipperary in 2014, you would struggle to nominate a stand-out display of his over the past five seasons. His double-life with the hurlers did him no favours in either code and between the jigs and the reels, he has contributed just a single point in championship games for Cork since 2013.

Colm O’Neill was the other Cork All Star in 2012 – the last time any Cork player walked to the stage on All Star night – and has achieved more than most in fighting his way through three cruciate operations over the course of his career.

But for a player who looked to be in the elite bracket at one stage, his recent return has been wanting. O’Neill has scored 3-24 in his last 10 championship games going back to the start of 2015 – take out scores from placed balls and he is averaging a point at game from play. Cork need more. Way more.

Cork’s failings go a lot deeper though. Zeroing in on particular players feels like offering up a tissue for a runny nose instead of addressing the overall malaise.

Cork are on their third manager in five seasons, with the started threat of a fourth in six hanging over them if nothing comes of this summer. So far Peadar Healy’s reign has had little to recommend it.

Relegated from Division One last year, they made no assault on promotion from Division Two this time around. A lot was made in Down of Jerome Johnston’s injury-time point in the final league game in April to keep the northern side out of Division Three. What got lost in the general hubbub over a rescued season was the fact that Down kicked 17 wides in Páirc Uí Rinn that day. Cork had nothing to play for and looked every inch of it.

It had been a theme of the league. Clare beat them for the first time since 1994. They drew against Meath having been 0-15 to 0-6 ahead in the 46th minute. Kildare walked to a 1-14 to 1-8 win against them in which Cork didn’t score from play in the first half. Occasionally Division Two will feature a team that has just dropped out of Division One and plays like they have no business being there – Tyrone in 2016 were one such outfit. Cork in 2017 were not.

If they were presuming upon flicking a switch come championship time, the Waterford game told them otherwise. Though they started with reasonable confidence, they appeared to shrink as the game went on. Walsh went off injured. Alan O’Connor walked on a straight red.

They survived a harum-scarum endgame to come through by the minimum but followed it up by only scoring a single point against Tipperary in the first half of their Munster semi-final. They had 11 shots at the posts in the course of that first half – to put that in context, Carlow had 11 shots against Dublin in the first half of their game the previous weekend. Carlow scored with five of them, however. Cork only had Luke Connolly’s looping effort to show for their labours.

Yet here they are. In Killarney, in a Munster final. Regardless of what happens tomorrow, at least 20 teams will exit the championship before them. If the wheat separates itself from the qualifier chaff in the way the bookies predict, they will most likely have either Donegal or Mayo to play for a place in the All-Ireland quarter-final.

So life is not all bad by any means. But then again, it’s the Cork footballers we’re talking about. That sort of chat tends to draw funny looks.

A reality only they can change.