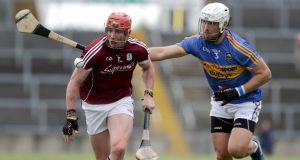 Conor Whelan: has been in impressive form for a potent Galway attack. Photograph: Morgan Treacy/Inpho

I’m with Galway for a while this season but, taking into account their track record, you couldn’t be absolutely confident. So far they’ve looked to be in good form but all along the consensus view has been the Leinster final would be their defining game.

Now, nearly all of us were expecting that Kilkenny would be providing the opposition but since the semi-final there’s a growing realisation Wexford’s presence doesn’t change anything about this for Galway. In fact, it probably makes it more awkward because they don’t have the same knowledge of or familiarity with Wexford.

They may also be going into this fairly cold. They haven’t been seriously tested since playing Waterford in the league three months ago. In the championship Dublin underperformed and although they scored 33 points against Offaly they didn’t manage a goal.

If anything like the mood in Wexford Park takes over and that 1996 emotion starts to build, that will create a monster, which won’t be easily tamed


Looked at positively from Wexford’s point of view, when the counties played in the league Galway were in a strong position, leading well and having the wind advantage. But Wexford came back. That exposure to the fire and energy that Davy Fitz has instilled in them means Galway have been warned.

But that’s just one side of it. There are reasons why Galway are All-Ireland favourites. When their game flows, it flows strongly. They’re physically strong and have an incredibly high work rate around the middle as well as top-quality forwards.

Conor Whelan is in excellent form whereas Joe Canning has found a role creating as well as scoring, working space around the attack and is in really excellent form. Can Wexford close them down?

Importantly they have also stabilised noticeably in defence because that cost them vital goals against Tipperary last year.

I think this will be a high-scoring match, in keeping with the season that’s developing, and Galway can back it up if that is the direction things take but there’s no doubt that Wexford will get their chances to make an impact and I wouldn’t underestimate them.

It’s easy to dismiss them as simply a team with a defensive system and sweeper but that’s misleading. Their backs also swarm forward and move up in a phalanx, a structure Fitzgerald has road-tested in latter years at LIT.

Corner backs Simon Donoghue and Willie Devereux travel and it was Donoghue who should have scored the vital goal against Kilkenny before David Redmond finished it. They get forward at pace and, as mentioned by Lee Chin, have been getting better at using the ball.

What will Galway do? Does someone like Conor Whelan expend energy getting up and down the field or does he chance letting his marker off and count on the move breaking down farther up the field?

If I were a corner forward I’d take the chance. If it goes wrong, you look terrible but every time the ball gets turned over you are in a great position to punish them.

Wexford need to stay in the game. Lee Chin – who needs to be curtailed far more effectively than Kilkenny managed – will be key to this and Jack Guiney should be getting fitter but the question mark over Conor McDonald’s fitness is seriously worrying for them. Cathal Mannion is a similar doubt for Galway and while that would be a significant blow for Galway, they have greater cover.

They do need however to be careful. If anything like the mood in Wexford Park takes over and that 1996 emotion starts to build, that will create a monster, which won’t be easily tamed.

Their interest is in turning the game into a shoot-out. The way Galway are likely to set up means Wexford’s sweeper Shaun Murphy probably won’t be picking up anyone and as a result, play disintegrates in all directions. I think that sort of game with a premium on accuracy will suit Galway.

Wexford aren’t as long on the road as Galway, who last year were very unlucky with the injuries to Canning and Adrian Tuohy in the All-Ireland semi-final. They haven’t won the All-Ireland for nearly 30 years and have won six leagues in the meantime.

It’s hard to say that they’re definitively different this year but I think they’re looking more relaxed and focused. I’ve a lot of respect for Micheál Donoghue, who’s calm and smart, and I’ll be surprised if he doesn’t get them performing on Sunday. If they perform, in my view they win.

The qualifiers this weekend are rather low-key compared to the high hopes there were of another Tipp-Kilkenny collision and the fact that Kilkenny-Limerick is the pick of the four tells its own story.

Gearóid Hegarty is back so Limerick will be stronger in the middle third. They didn’t show a lot against Clare but I think encouragingly, their younger players performed well.

Kilkenny aren’t good but the home draw will benefit them. Had they to go to the Gaelic Grounds, it would be a different story. The uncharacteristic failure to name a team until the Saturday of the Wexford game wasn’t as it turned out a sign of strength.

A lot of the thinking before the semi-final was that Michael Fennelly would be fit to play but that didn’t happen and is unlikely this time, either. A number of their forwards had to be substituted and the barrel isn’t overflowing. But I think their physical maturity will be enough to get them through against a younger Limerick.