Down dismiss the doubters and get back in business 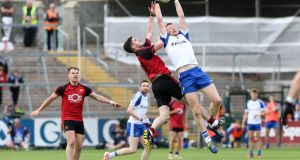 Eamonn Burns isn’t one to hold a grudge, which is a good thing, because most managers would have turned around after this result and pointed in the face of all those who had doubted his Down team over the past year.

And they were many – both inside and outside the county. Only now Down are back in the Ulster football final, their first since 2012, after causing an acutely seismic shift in the province.

Because when the pressure piled on and experience came screaming, Down somehow reversed all the psychology behind this game and gave Monaghan a lesson in self-belief.

Still it would have required a considerable leap of faith to see this coming; not that there’s any doubting the result – Down’s boldly energetic and brilliantly attacking football as good as any province has so far witnessed this summer.

“We were written off against Armagh (in the quarter-final), were written off here, but these boys have worked very hard, have prepared themselves well, and full credit to them,” said Burns, the Down manager calm in the aftermath of Saturday evening’s triumph.

“When you put yourselves in front, build a platform to win the game, you have a chance. And when we came in the second half, particularly the first 10 minutes, we really cemented that belief.

“We knew Monaghan were going to come back at us, and they did. But we weathered the storm, were disciplined, tackled hard, and when we won the ball back we used it well. At times we could have used it better, but we got the ball over the bar in injury-time, got ourselves over the line, and that’s a massive boost to this team, massive boost to these players.”

His calm philosophy – and indeed psychology – provided much of the platform. Burns also recently brought in sports psychologist Brendan Hackett, the former Offaly, Longford and Westmeath manager, to work with his players, help rebuild some confidence after they’d gone the entire 2016 season without a win of any sort.

“You’re never totally confident,” he added. “You just prepare them as best you can. But we just reinforced that belief at half time, to keep taking our chances, and we’d a great chance of getting to an Ulster final, and we did that.”

It will be fascinating to see how far that positive psychology goes against defending champions Tyrone, on July 16th.

For Monaghan, there could be no complaints, only the faintest suggestion of some complacency. Down found themselves seven points up, five minutes into the second half, thanks in the main to a penalty from Darragh O’Hanlon.

Even though they only added two more scores before the end, another free from O’Hanlon, and the late insurance point from substitute Donal O’Hare, in the sixth and last minute of injury time, Down also had a seemingly legitimate goal from Conor Maginn disallowed, late on, by replacement referee Paddy Neilan.

Monaghan never gave up the chase, Jack McCarron squandering one last chance to score a potential equaliser, only to send his free wide, on 74 minutes – before O’Hare sealed the deal anyway.

“Yeah, our boys were under pressure to get ball, but Down I have to say came with a really great hunger about them, chased everything down, and we never really got control of the game,” said Malachy O’Rourke, who had guided them to three of the last four Ulster finals, wining in 2013 and 2015.

“I never doubted we’d come back, but after conceding the penalty, that was the killer blow, hard to recover from. But that’s Ulster championship football, you get one bite at it, and we weren’t good enough on the day.

“We knew Down had been disrespected in many ways, had been forgotten about, as a proud football county, so we know they’d come with a great hunger. Fair play to them, we’ll just have to lick our winds, it’s a big blow, but our job is to lift to boys, and see where the qualifiers bring us.”

For this result, a 21-point swing on last year’s quarter-final, the defining score here coming five minutes after the restart. Ryan Johnston latched onto a sloppy kick-out from Rory Beggan, passed off to Niall Donnelly, who promptly charged back at Beggan. Instantly crowded, then hauled down by Colin Walshe, it served as the siren call for O’Hanlon’s penalty.

From there until the end Down’s belief soared. In truth, Monaghan helped invite that belief, their first four shots at goal all drifting wide, while Down’s attacking options appeared to grow. Monaghan’s first score came from Drew Wylie, and with that momentum swung back and forth like a large electrified pendulum. Rarely has 70+ minutes of football passed so quickly.

Full forward Conor Harrison, testing every handful inch of the man-marking skills of Drew Wylie, finished with three points, before retiring early through injury. Kevin McKernan took centre stage too, firing over two points from close to the right sideline, raising spirits while he was at it.

Caolan Mooney’s piercing runs from centre back were the root of others, one deftly finished by Conor Maginn, taking their advantage to four towards the end of the first half.

Then, as if cue, up stepped McCarron and Conor McManus, tagging on scores just before the break, to leave just two between them, 0-10 to 0-8. That last point from McManus was a model of skill and proficiency, but he couldn’t get close to the Down goal to do any real damage.

In the end then Monaghan simply left themselves with too much to do, especially after Down hit them with 1-2 after the restart.

Points from Darran Hughes and further efforts from McCarron and McManus closed the gap to one, but they could never get level, before O’Hare found himself in acres of room to close out the real surprise deal.

For Burns, part of the Down team who last won their Ulster title back in 1994, the task now is to reinforce that winning psychology for the challenge of Tyrone. For now, whatever doubts Down may have harboured are gone.

Confirmed: College Football Classic will not take place in Dublin in August 13:09
Southampton manager Ralph Hasenhuttl extends contract 12:58
Formula One confirms rescheduled European calendar 12:48
Gerry Thornley: Stoppage could tip balance in favour of big money teams 06:30
Increase in membership a plus for adapting golf clubs 06:00
Here is your handy guide to sport on television this week